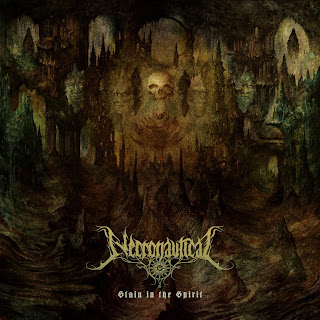 Symphonic death metal is not normally my thing. If it gets to Nightwish like then I am out for sure. This British band give it enough teeth and hook in the guitars to make it interesting. They begin sounding like songs that Dimmu did not care enough to make cooler riff wise, on the second song. This is still better than your run of the mill death metal band as Dimmu's throw away riffs are still good enough. The guitar playing is nuanced when it needs to be , but it feels like we are often just checking off the boxes for needed metal tropes. There is a touch of black metal to the title track. At this point any band from Europe this is almost a given , unless they are fully entrenched in the sound of their region like say Swedish Death Metal. There are some cool head banging riffs to this one , but the rule here is cool riffs alone does not a good song make.

"Hypnogogia"  seems intent on sticking to the sounds they have used thus far. Yes there is a shift in melody. This is perhaps catchier than the previous song which relies more on speed. They rock out with more authority when they are pummeling into you on "Pure Consciousness Event".  I breezed through "Necropsychonautics" without really being aware that I was on a new song. So this is an indication that all their songs begin to sound the same to me. Sung vocals come in , somewhat like Dimmu does though they do not sweep in and take over the song. The pace of the song stays the course and they chime in from the background. The higher more black metal like vocals begin to control the mic at this point. There is a gothy symphonic section at one point that is a nice touch.

The chug that drives "Death Magic Triumphant" works better than many forms of attack they have employed thus far. Upon hearing their cover of "Disciple" I think it is clear this band missed their calling as a Slayer tribute band. Who knew a death metal tribute to Slayer is what this album needed. The best song is not their song is another way of reading that I suppose. I will round this down to an 8, they have mastered the sound and 80 percent of what they do is well done , though not the most original thing , and I do not have a great deal of time to listen to music  I am not reviewing so when I do I stick to what has more of it's own voice, but you might not have this problem.