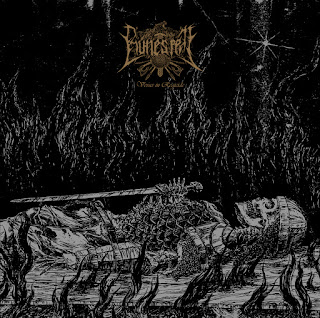 The projects 4th album,. Like many extreme metal band when you hear the first song it is often so impressive in terms of sonics and sheer intensity that you are going to give them a pass on really digging into their song writing due to the sound they hit you with, This was the case going into this album. With the second song I began to ask more questions. What are they doing differently from the hundreds of other bands who do this sort of thing ? Well not much if anything at all seems to be the answer I am getting after giving said song another listen. By the time we get to "Realm of Fire" we are beginning to hear how all the songs sound the same. On this one the tempo picks up and the guitar has more tension to it. Sure it rages harder , but this does not bring anything unique to the table.
There is a folky instrumental interlude which is required of all one man black metal projects these days  and then the more mid paced stomp of "Tides of Slidhr", which I appreciate more that I took time to step away from the album as it was all sounding the same. It has more of an Immortal feel here, just less thrash influence , their riffs are not as big by far. When it comes to song writing , while it does gallop across Middle Earth in one flowing pace and is not the most adventurous in terms of composition, it is an effective sound that almost gets you lost in it and forget you have been listening to the same thing prancing around for four minutes until the guitar breaks down a bit. I used to deconstruct the song writing way more than I do now so if  In some ways the song flows in a manner similar to what Watain does . Watain is just much better at doing it .
The same could almost be said for "Shadow's Dominion" who chug is all that keeps it from sounding like all the other songs before descending into atmospheric metal mush, which in some ways is what the project gets the most about black metal, there is more form and function here than early Darkthrone , but then there is the thing about Darkthrone , the fact it was earlier than this. We have been here and done all of this before. This sums up the album as a whole I will give this a 7.5, as good at what they do doesn't really cut it it, this project does rise above that bare minimum but I do not hear much in the way of what makes it an entity of it's own with a personality that creates it\s own sound.
Iron BoneHead Productions · Runespell - Structures Of Collapse
Posted by Wilcifer at 6:28 AM