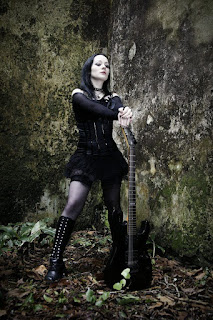 Here is one for my friend Oliver Sheppard. Rather than save it for the celebration of goth in October I do here, I am knocking this out now. More often driven by slinky bass lines , the guitarists of Post-punk bands are unsung heroes creating tension in the shadows.  Granted when it comes to post-punk I prefer the more death rock side of the graveyard, but I have also included some players who influenced the genre as a whole even if they are not just thought off as the ghoul fathers of the genre .Let us go ahead   release the bats and have a listen to my Top 10 Post - Punk Guitarists.

This Christian Death guitarist captured the creepy underbelly of the scene they came from with his tone and the slink of his guitar melodies.

Often imitated, he made the most with what he had to work with and was a mater at crafting tension.

Gang of Four was more punk than most of the bands represented on this list, yet Gill's often aggressive jangle put some fun in the otherwise explosive temperament of the band. Perhaps not  the darkest sound here, but a very influential one.

A well rounded player who evolved along with his band until he ushered in what would be the precursor to industrial, rather than settling for metal , he kept things sonically heavy.

Before Type O Negative, came Wright's band who got heavier with each album, thanks in part to the roar of their singer . Wright started started off learning jazz which opened the doors to a wider world of chord phrasings

His tone is the Las Vegas to his counterparts heaven of a voice. All too often bands focus more on a sound than songs, he made his sound into songs .

There is something beautiful and biting that puts him up[ this high on the list. He can stir darkness together in chilling chords, but still has balls to his playing that is heavy in it's own right.

An underrated player , what puts Smith above the bulk of his peers is his range as a player, his playing was always evolving into a broader expanse of sonic colors and styles , rather than just sticking to his simplistic punk roots

Mick Ronson, is a guitar hero of another era, Reeves Gabrels also deserves honorable mention for his work in Tin Machine alone, not to mention he is a member of the Cure , but Alomar worked alongside the likes of  Robert Fripp to craft an off kilter dissonant sound to influence post punk to come, he also played on some of Iggy Pop's more iconic solo albums.

He should be in the top ten of any guitar list. His tone is immaculate and he made using a clean tone cool during a time when Eddie Van Halen was taking his own flashy throne that is the polar opposite to what Marr was doing in the Smiths . If this is to be called into question, then pick one of the many odd tuning's Marr played in and try learning some of  his weird and wonderful chord structures they are a lot harder than they sound. He made it look easy.

Email ThisBlogThis!Share to TwitterShare to FacebookShare to Pinterest
Labels: David Bowie, the cure, The smiths, the Top 10 Post-Punk Guitarists