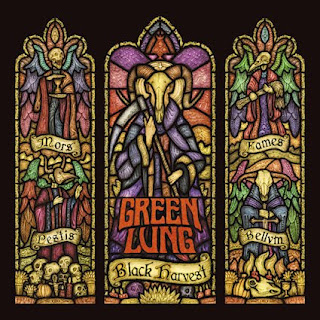 The first track finds the British band in a more Rush like prog place than anywhere near doom, it's mainly an intro as the real first song is "Old Gods Final". It still has a Deep Purple like prog feel, some of this in part to the vocals which has a dramatic sneer not unlike Ian Gillian's mid range. "Leaders of the Blind" is a little too happy for me in the way it picks up the pace. the vocals are not as memorable as they were in the first song though in places the guitars get a little more aggressive. The guitar solo had more flash than expected and will also appeal to the metal minded. There is more of a stompy stoner metal feel to "Reapers Scythe". The vocals seem to be trying to find their place amid all that is going on musical between the key boards and the guitar. He does sing up into his upper register on this one, which is cool to hear that he is at least willing to give it a shot.

I appreciate the more melodic shift on "Graveyard Sun" , but the vocals are not very hooky. The chorus works but not something that is going to get stuck in my head any time soon. Not a dark song, but moodier than the previous songs. If you were unsure about flashy guitar work being their thing , they are going to remind you with "Black Harvest".  I am only marginally impressed by that sort of thing but not going to tell you he is not a great guitar player either. The fact the guitar is not Sabbath dark makes me think more of Blue Oyster Cult. It is also why this doesn't strike me as all that heavy. Even with the Hammer Horror Satanic lyrics. When they take a right turn and make less of an attempt to be metal or spooky it works better as it is becoming something that is not who they are , which is what makes "You Bear the Mark: work for them. Despite the fact they are still trying to hard with the lyrics and throw what might be metal riff in if they were executed with more aggression. Some times the guitar reminds me more of Queen.

They to crunch you back to the old days with the more metal minded riff to "Doomsayer". Is it the album's best song ? No, but it is big dumb fun and catchier than many of the songs. The last song "Born to a Dying World" flirts with gospel like organ sounds.  Not that this is not something that bands like Deep Purple who were also very soulful have already done. It is the more rock punches to this song that make it work best thought blues  direction of the guitar is pretty great. I will give this one an 8.5. It is a excellent album, but I prefer what they did on the one before the more, it was a little darker. This album drops October 22nd on Svart Records.