Cactus Black : "the Marrow of Our Truth" 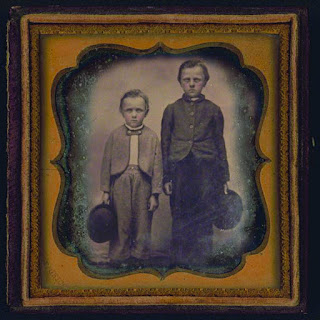 This is a nice bit of folk tinged rock. Moody on the first song , sung in a mid tenor range. It is not until the second song that more of an aggressive mood creep from the edges of the vocals as the guitars brood like a storm. When the song builds up there is a collision of everything from punk to country going on. There is a restrained tension, where they are rowdy but not letting it all out like if this was metal where they just attack. There are some hints of heavy dynamics in how things develop, which works for these guys. I am fine with them doing their own  thing as it works really well in the first two songs. "Poor as Dirt" finds the at first relaxing back into more of a western place until the pace picks up. The vocals develop a throatier bellow. They prove they can be explosive as needed with some of the outburst used to convey the violence in the bank robbing lyrics.
It is interesting how these guys fall somewhere between the Menzingers and Murder By Death. Vocally he is capable of dropping into a more melodic singing voice on some of the more folk like introspections on "After the Hold Up". Yes this is a concept album about bank robbers. I am not sure that makes these guys outlaw country as the country part is not as thick as most bands that dabble in that. I guess somewhat unironically things get heavier going into "Carry That Weight", though these guys are more punk in their intentions than metal. The vocals are a more aggressive shout on this.
The dark groove on "Jesus of Ohio" really rules, it is the album's best song so far. Though I have yet to come across a song I dislike. They get back to a more staccato folk tune with a bit of rambling country attitude to it on "State Man". There is even more swagger summoned up with the brass added to the boozy folk of "Whiskey With a Ghost".  The lazy strum continues as the story begins to wind down on "7 Years on Death Row "  This is not the first time the vocals have taken on an emo like pleading quality but it is noticeable enough here for me to point it out again. I am fine with this. The last song builds off that same emo folk thing and works in a summary of what they are about as a band in  the way the dynamics climax back up into a rock feel. I will give this album a 10 , it is one of the best new dynamic rock releases I have heard in a minute.
8
Posted by Wilcifer at 5:12 PM