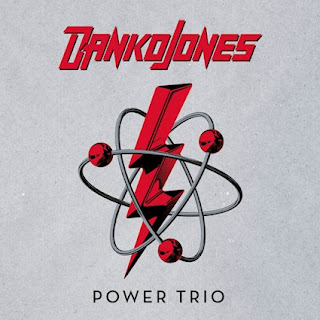 I know these guys have been at it for a while and I have heard their singer on other sings but never really sat down to digest t an entire album of theirs. I have caught little snippets of their singers talking all kinds of political bs, so that was a turn off but being able to separate stuff like that from the artist  as long as they are not shoving it down my throat I settled down for a listen to find something that sounds like if James Hetfield was fronting a cock rock band. In some ways that equates Monster Magnet, but here it is a little more straight forward. It is ok, but wondering if we are getting an entire album of this dynamic. The second song is more like if Clutch was a cock rock band. Then on the 3rd song we come to the root of the influence here which is  AC/DC. Pretty meat and potatoes rock n roll.

This kind of lowest common denominator party rock was huge in the 80s and they brought that spirit with them. Aside from the "Owner of a lonely heart" style riff, they shit the bed with what might have been an otherwise interesting song with the lyrics to "Raise Some Hell". They are back on more of a Clutch tip with "Blue Jean Denim Jumpsuit". But the cock rock is dialed up to 11. While I love Clutch I have more respect for the Thin Lizzy vibe to "Get to You". Which is my favorite song so far. "Dangerous Kiss' just feels like we are recycling some of the same things. By the time I get to "Let's Rock Together"|    I am bored/.  "Flaunt it" tries pretty hard to be punk rock , but is the least interesting song so far as this could be any garage band in any bar.