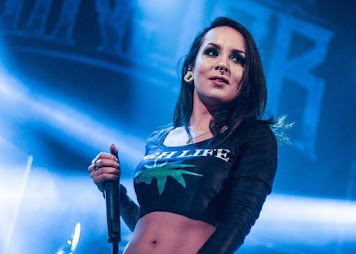 The first tracks is pretty much color by numbers mainstream metal, with the guitars taking a few tricky turns , rather than just grooving. the fact Tatiana has a power gender neutral growl is now a mute point. It is her sing voice that helps set them apart. New Spirit Box is going to drop and then what ? Aside from the clean sung section the rest of  "Colossus" is just a grab bag of stock metal riffs. nd well produced but it is the more dynamic side that is touched upon with "Vortex' that makes them stand out more. Do the first two songs come across as heavy ?  Compared to what ? Normal mainstream metal? yes... compared to Ruin or LLNN ? No. They are not even the heaviest Ukrainian band. "Vortex" does return like a dog to it's shit and allow it self to wander into the maze of typical metal riffs but the more melodic sections offset this.
By the time we are at "Disclosure" the songs begin to sound the same. The song itself holds it's own again the first few songs but when it progresses into a heavier dynamic the album begins to become a blur of crunchy riffs. There is very much a formula beginning to develop. Perhaps it is the more break neck speed "Copy Cat " crunches at when the more hooky sung vocal is not in session, that makes this song kind a pass by in a blur. Much like the singer from Sumo Cyco, Gwen Stefani seems to be an influence on the sung vocals. This gives them a more poppy undercoating. It does not make "Pearls and Swine" much more interesting . The main riff does throb with a little more atmosphere, but other more typical metal core tropes tend to over power this. The drummer is great. They are are much better musicians than they are song writers. Though even they show potential, I think if they did not go to the more obvious places then it might be more interesting. Granted I have been listening to metal for at least 35 years , so I have heard all of their better riffs played by bands 30 years ago when thrash was breaking out , so I am less impressed than a 12 year old who is just discovering metal. They just do not know better.
Does "Sleep of the Righteous" convince me otherwise?  Um, no it kind of sounds like they are recycling riffs before it takes a melodic turn. The title track is pretty cool, though from what I remember of their previous work they have already done something in this zip code so they are not really breaking new ground as a band , but it is better songwriting. I fear the same thing can be said of "Dead Hands Feel No Pain" . Sure there are some technical riffs , but aside from dissonance they do no consistently do a great deal for me here. "As I Boil Ice" feels like it just picks up where the other song left off.  They do make it more interesting the the past couple of songs. The last song was pretty meh... nothing new to hear here moving on. I will give it an 8, it's well done and there are a few good songs, just kinda played out when they needed to bring something new to the table.
Posted by Wilcifer at 4:40 PM