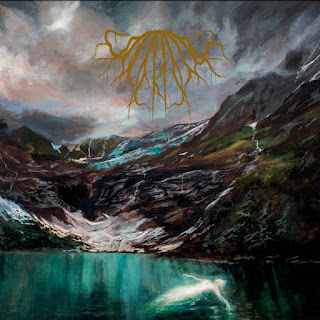 This British band is primarily black metal, but in the most hipster sense that is why is comes across at times as being a little screamo. Be that as it may this also allows them to use other chord voicings rather than the tried and true tremolo picked fare we normally get from black metal. Also the lower growls are pretty cool as well. The more spoken second in the melodic break down of the title track has more of the emo part of the equation in play. I am not against this as it does add another color to the more post rock section of atmosphere. When it takes off into blasty chaos we have been given something to contrast it with. This supports my frequent rule that if you play loud all the time it is never loud as you have no quiet to show you what loud should look like.

"Coyotes" starts off very sedate in terms of the delicate guitar that serves as the calm before the storm. These guys have already shown me the potential they have so when they go into the more straight forward black metal sections it feels a little like a cop out. Though this song did click more for me on the second listen. However at this point in the album it is beginning to feel like the vocals are an after thought rather than contributing a great deal to the song. Another factor here is how they are hitting all the same expected beats for what "black-gaze' is supposed to be with out re-shaping it into who they are. They did show us more of this in the first two songs, but what separates a great band from and ok one is the consistency to do this with every song.

"With Ashen Hands Around Our Throats" they buzz to life as if they are from further north than England. Sure this kind of rabid intensity is to some extent what the genre is about , but we have heard it done in the same manner ten times over at least, making me ask once again to hear more of who they are and hear their vision of this. When the more deliberate punches come toward the second half of the song and things slow down it is really welcome, but I would like to hear this integrated in a less formulaic way. I like these emo  parts but would like to hear them worked in with a less predictable grace. It doesn't suck, but at this point this sort of thing has been done enough to where no sucking is not enough and something new needs to be brought to the table. I was midway into "Skeleton Queen " before I realized it had gone onto a new song, so they begin to lapse into a uniformity when it comes to their heavier sound. Then just when you think they are  going to get emo on you they do. I like the spoken part about drugs, perhaps if some of the other lyrics stood out it would be more meaningful. I will round this down to an 8.5, which puts them ahead of all the other bands trying to do this sort of thing at least until that new Deafheaven comes out. They are good at what they are doing, I think they are talented enough to bring something new to the table next time. For my listening time, I already have this done better in some ways so not sure if the emo twist makes enough of a difference for me to want to play this on a more regular basis.

Our Bodies Burned Bright On Re-Entry by Underdark