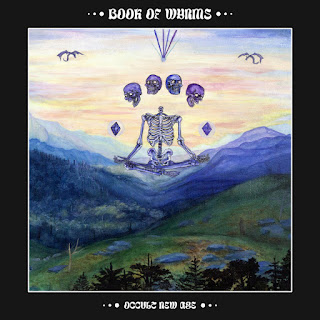 The kind of retro tinged stoner proto metal that rose to a new level of popularity just over a decade ago is back with this band from Virginia. The Lindseys are a husband and wife team, with Sarah singing and Jay playing bass. The guitars are pretty dominate in the mix of these very jammy tunes. They move at the pace of Ted Nugent with more boogie than doom lumbering, though the Sabbath influence can be felt, however at no point in time do they feel like a tribute band which is one thing I like about them. They do get into a more doom like heaviness going into "Hollergoblin". This shifts into a more drugged out groove. I like that they are quick to think out of the stoner metal box. The vocal melody which comes in four minutes into this 8 minute song glides over the song well.
With each song it seems like they are progressively getting darker. By the time we are at "Keinhora"they have turned in more of a doom direction. The gloomy vocals are able to have plenty of room to properly haunt the song. "Speedball Sorcerer" finds them inhaling from the bong and going into the kinda of metallic shuffle that colors more mainstream stoner rock. It is colored with flourishes of synths and guitar licks to keep it from being too much of a booted fairy spectacle. They continue to party down the a similar path just with a different groove on " Weather Worker" . The drum fills in a couple spots remind me of "the Wizard" by Sabbath, but as a whole this is jammed out enough they it is a part of their own sound.
For the last song "Dracula Practice' things get a little darker,  you almost have to if you are writing a song about Dracula. he melodic section four and a half minutes in where the guitar solos simmers from is really cool and all the groove that surround it. This might be the album's best song.   I will give this album a 9 it is really solid and well down,  sounds great has a warm organic sound without coming across like they are trying to hard to capture a bygone era.  Everything flows really well and I bet these guys are a blast to see live if that ever happens again.
.4
Posted by Wilcifer at 11:09 AM