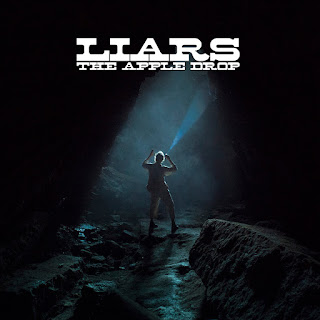 The 10th album from this experimental  project whose only consistent member is the founder Angus Andrew . They continue to throw electronic music against post-punk and see what happenings. Each album has a different result , this one is no different in that regard. Perhaps equal parts moodier and darker. The vocals of the second song "Slow and Turn Inward"  find them conforming more to conventional song writing than previously expected. His melodies range in shades of depression and unhinged tension. "Sekwar' drones into some hypnotic and beautiful places. I have always thought of this band as being torchbearers for the kinds of moods Swans brooded from in the 90s.

There are moment of sonic beauty on songs like "Big Appetite" . It flows more than grooves and the mesmerizes with the shimmer from the shadows. If you are wanting this project at it's weirdest and most dissonant, then this album might not be for you as more often than not it has coherent songs. Songs that hit you with a narcotic pulse and a sardonic scowl, but very textured and melodic none the less. In fact five songs in and I was convinced this is the best I have heard from these guys in a while. Perhaps more emotive there are moments where it feels like they are cut from a similar cloth as post -"Daydream Nation" Sonic Youth. There is plenty of eerie atmosphere coloring the sounds they wove into songs here. This is more accessible as in it is easy on the ears, but far from selling out or any appeal for radio play .I mean is there such a thing as alternative radio to play this sort of thing on in the first place.

They reach for the heavens with the chilling "Star Search" . His baritone proves flexible in it's moan. His croon leans more towards a ritualistic sing song chant at time. His falsetto is more like a a voice cracking in a very creepy manner.  "My Pulse to Ponder" is the first song to have a more tangible punk in it's veins and by punk we are talking the Stooges here. Production wise this album is perfect as it is raw enough to get the point across, yet mixed in  manner that balances all of the lush sounds being gathered . The buzz of analog synths dominates "Leisure War".  One of the album's more angular songs. It is the interesting drum mix that keeps the song on it's feet. In some ways "King of Crooks' feels like a continuation of the mood established on the previous song, just smoothed out with a dreamier vibe. The hypnotic flavor of weird comes together with a glaze of psyche on "Acid Crop".  The last song is more of an outro as the experimentation gets dialed up to focus on ambiance more than song, regardless his songwriting was at the top of his game this time so I will round this up to a 9.5