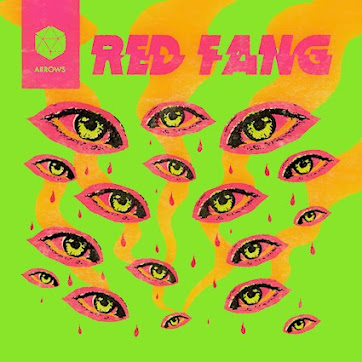 These guys are a band that has been on my periphery as I have friend who are really into them , but I never gave more than a few listens here and there .  This is the stoner metal band's 5th album so they know what they are doing. The first actual song finds them grinding into a very weighty riff with gruff vocals on the verse and smoothing out into a more melodic chorus. Pretty typical modern metal formula. It borders of being sludge thanks to the raw rough guitar tone. The title track finds them tightening thing up into a hookier sound that is more like if the Foo Fighters were a metal band. The vocal melody is streaming radio ready for sure. "My Disaster" is more up-tempo in it's rumble. The drums were recorded in an empty pool, which places into some of the condensed boom to the stripped down yet tinged with noise sound of this album.

"Two High" has enough rock boogie in it's groove to make it catchy. This shows that yes you can play heavy music and still be catchy .  There is a darker Melvins like feel to "Anodyne" . The melody to the song is not as memorable but the song itself works well. There is more of a sludge stomp to "Fonzi Scheme" which might be the album's best song title. As for the song itself. The vocals feel more like something Baroness would do. You are comparing this to too many bands , you the fan of the band screams . If you are under the misguided assumption that these guys are the most original thing going , then you are already a lost cause and you can stop reading. In fact stop reading this blog all together , since my mission statement is to give the brutal honest listen stripped of fan trappings, even when it is a band I like.  I prefer when things get darker and more depressive on the song " Day's Collide" .  I think when this mood is created , the throb of it gives everything more room to breathe .It also provides a contrast to when they give your ears a burly beatdown when it builds back up.

"Rabbits In Hives" is basically a punk song that proves, punk is not what they are best at. There is a more grunge tinged feel to the melody of "Why", when it builds up at the chorus it is more par for course metal if we are talking the 90s . So kids who did not live through that might be amazed. They come back to pounding you with the angular blitz that is "Dr. Owl" . As a song it does not do a helluva lot for me, great bass tone though, I was also always ifffy on AMP Rep bands. If noise rock is your thing then you might like moments like these more than I. The vocals just kind of descend into reckless bellowing. "Funeral Coach" shows that this can be like Burger King and I can have it my way, both really heavy and very melodic. In all genre's of heavy music vocals are one of the more disposable elements , second to bass. The great bands have  great bass players and vocalists which sets them apart. I would say these guys are a very solid band. Great might be a strong adjective though this album is their strongest to date so I will give it a 9.