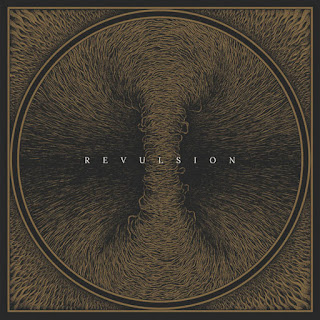 This month gives me time to get way caught up on all the death metal I might have missed out on along the way. This band out of Finland released their self titled album back in February when I was focused on black metal. They put enough, groove in their riffs to keep me engaged , but are brutal enough to please fans of the genre. The opener has more breathing room for groove making it a stronger song than when they get too locked into a frontal assaults' and forget some of the finer points of songwriting they displayed there , as when it is just pounding they sound like every other death metal band. I do like being able to hear their bass tone on "Walls". The vocals almost take on a lower sung moan, that is more like Morbid Angel. These are the moments I want more of as they give them a clearer sense of personality rather than just sounding like every other death metal band.
On their fourth song they get darker and more sonic . This helps give me more of what I want from them . All too often death metal bands just write songs in the key of blood red and we do not hear the other textures . The growl is often in such a low gurgle it reminds me more of funeral doom, though you can still understand the lyrics . The vocals have a purpose here and are not just an after thought. Another strong point of this band is they keep things very focused and under the six minute mark. The rule cool riffs alone does not a good song make , can be tough on a song like "the Wastelands' as the cool riffs is what breaks up some of the otherwise boorish battery to your ears they bring about. "Unravel" finds them pulling it together more and making something memorable. Now is it Morbid Angel level memorable? No. and to be fair it is not even their best song ,but is at least moving in that direction .
"Silence " hammers it home like old school 80s death metal. Bringing Deicide to mind without all the demon voices . Not the album's most original song ,but it works.  "Pawns" hammers the point home more intensly. They really kill on the last song which has a really awesome riff, so glad they take us out on their best foot.  I will round this up to a 9 as I am still fresh into death metal month so not burned out on it. But I think what counts the most is how they took familiar sound and  assembled them in a way that made them fresh and memorable, if you like classic death metal this is a must.
Posted by Wilcifer at 5:18 PM