Ancient Wisdom : "A Celebration In Honor Of Death 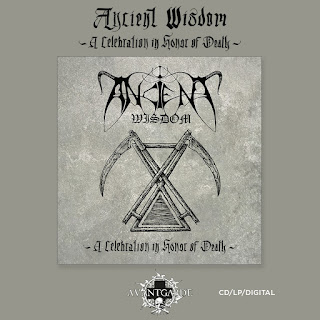 I see the words blackened doom on everything except when the band is actually playing a doom black metal hybrid like this project from Sweden is. Much like Burzum, this one man band is helmed by Vargher from Naglfar The keyboards and atmosphere work really well here and this is a great example of you can have both a sound dialed in and still; care about writing a song. Yes this kind of carries a drone to it and is more akin to a soundtrack track than pop hit , but that is ok. By the time we get half way into the second song it is clear this guy has a flair for richly orchestrated arrangements. To be honest I have not really been blown away bu much black metal lately so hearing something like this is really hitting the spot for me. The vocals are harsh but you can make out the lyrics and they almost remind me more of old Bathory.

By the time we get to "Architect of Death" it starts to sound like lots of other symphonic black metal. To Vargher's credit he does not resort to taking the easy way out by overloading on blast beats.  "the Coronation" is more doomy in the deliberate nature of the pound it opens with. When it builds from this it falls some where closer to Dimmu Borgir, but with the passion of Watain. It sounds great and is well done , but leans more on the black metal side of the equation and not the album's most original moment. \"Those Who do Not Exist" throbs along the same vibe , which is more doom like. It is almost like an idea of a song they just jam on but still works pretty well.  "And God Saw" is a pretty well blended mix of the black metal and doom influences. It moves with a mournful majesty.  Sure the symphonic elements are in their but they work towards making it more of a dirge like requiem. There are sung vocals mixed as a chorus back into the wall of sound.

Bell ring and creepy chords cry out , with this being an album with a great deal of doomy darkness to it,  they do a good job dialing that up more. It breaks down on the verse in a very Dimmu manner with spoken snarls and keyboards. It builds into  a more epic black metal undulation. No not the most original moment on the album, but I like the vibe being laid down that makes this more forgivable. I will round this down to a 9. It seems they settle into some of the more common place black metal themes sonically though do avoid going into blast beats. The song vs sound struggle wins out on the side of song , this is a very strong effort and one of the year's best black metal moments.