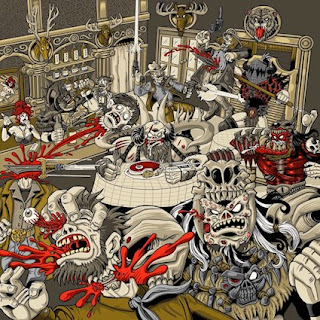 When reviewing Gwar there is always the temptation to talk about them in terms of their fictional characters and make this seem like a Dungeons & Dragons campaign , but instead I will stick to just the music as the personas of artists do not matter when it comes to the music. This rule also applies to Alice Cooper and King Diamond, so it fits here as well. An ep of acoustic versions of their songs is clearly the band stalling for time. Mike Bishop who was the original Beefcake the Mighty took over on vocals for their last full length "the Blood of Gods" . This worked for me at the time. I really liked that album as it did their legacy justice and Bishop had been part of the bands vision from the get go. This shed a different light on that.
What plays in their favor at first is sticking to songs from the last band. The stripped down version, lays bare the vocals . On "Fuck This Place" I can hear the Blackie Lawless influence I thought I heard on the last studio effort. This song ends up working well . "Gonna Kill You" is given an more folk arrangement that asks more from Bishop vocally than we have heard from him. He pulls it off by the skin of his teeth. The offer up a more blues soaked take on " I'll Be Your Monster". Which was not one of that album's strongest songs. This one also works when push comes to shove.
In theory you would think "the Road Behind " would have translated well to an acoustic format. Mike played on the original version. I think this highlights how Oderus is a better singer of the two. He had a better chest voice to croon from. Bishop hits the notes, but it doesn't sound like he feels them.  I will give this one an 8.5, far from the best thing this band has put out, it almost feels like this whole thing is all Bishop, as it's just guitar so not a lot fof the other guys to do, we know he plays bass so he could have pulled this off all by himself.
Posted by Wilcifer at 9:45 AM