Black Waves of Adrenochrome – The Sisters of Mercy Tribute 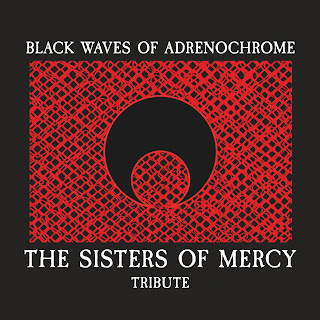 A metal tribute album to Sisters of Mercy is a pretty safe bet. Sisters were already half way there and they have certainty influenced most of the darker metal bands. The trick is capturing Andrew Eldritch's vocals . This can be the sticking point when many of these bands growl more than sing. In some cases this is the first foray into singing I have heard . Another odd thing about this album is it is not the bands that you think have this in bag that shine here. Case in point being the fact that Atrocity's cover of "More" smokes Paradise Lost's  take on "Walk Away". You would think Sisters of Mercy would be their bread and butter. Part of the problem being Atrocity just picked a better song/
Cradle of Filth is known for really butchering most covers they try to tackle. Dani Filth does does than I expected here. "No Time to Cry" is not my favorite Sisters of Mercy song by far,  "Deadlock" has better female vocals that help out with some of the backing parts , but she also sings some of Andrew's parts up the octave. I think they at least captured the spirit of the song. Nevergreen does an even better cover of "More" than Atrocity. Seems an odd song for multiple bands to cover on the same album. I have never heard of Maryslim, but they got to cover" This Corrosion". They do it justice so I guess there is not much room to complain about it.  Daeonia is another new band for me , they fare pretty well with "Alice".  Kreator is an odd choice for this album. They make "Lucretia My Reflection" work, but the odds were in their favor since it is likely the best song.  However Dan Swano steals it away from them with his cover which might be the album's best.
Dreadful Shadows who closes the album wit ha pretty solid take on "1959" makes me feel like they were already a goth band and not a metal band covering goth. Crematory offers a heavier take on "Temple of Love" than the earlier version . Columbia Obstruction Box just does not seem like they are on the same level ass even the least known of these other bands. Their "Marian" is passable , but the vocals felt pitchy and strained.  I will give this an 8.5, since not all of these songs are new , the Kreator version was sitting around a few years . They assembled some lesser known covers from bigger bands to help bolster the lesser known bands, not a bad business model.
Posted by Wilcifer at 3:44 PM