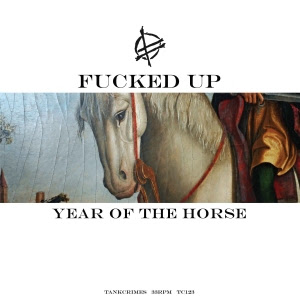 Living up to their name, what was once a punk band is now making 20 minute songs. "Dose Your Dreams" worked well for pushing the envelope, this time they might have gone too far. It took two minutes for them to get into the first song. When they get there I like what is going on though the proggy nature of this makes it feel more metal. I have a feeling this is either going to turn into fine ideas that would have made good songs if not crammed together or songs that are in dire need of editing .  Things do take a turn with female spoken word and folk music. Then things get really metal , like Mastodon covering Bathory before they go off on some Norah Jones jams. If they cut out the folk parts it would be solid.
They open the second song with another 2 minute intro before a more Clutch like boogie goes down. They stick to the Clutch thing for about 2 minutes then go off into a ballet. The jam with Billie Ellish for a little while when not making Western soundtracks of Candian coffee house pop. . i mean this is a 26 minute song. For me to even absorb all the places they go here is asking alot. There is a great deal of prog metal going on in the second half . These moods do not flow as smoothly as they did in the first song. There are some cool parts , but all the cool parts could have been woven into a more compact song and been more effective. They are smoking a ton of really good weed that is something coming through loud and clear.  22 Minutes in they become a Ween tribute band. Until 2 minutes later when they really wanna be prog.
Mastodon is not the only sludge band that became a progressive band. Neurosis to some extent set the path for them as they journeyed into more Pink Floyd like places. The third song also fits this mold of sounding like a sludge band that went prog . It is the most cohesive song on the album. If you took out the symphonic parts it is 18 minutes of solid progressive sludge. There are barely any punk moments. The closest we get to them , is going into the thrashing of the last song.  It is   a 26 minute song , so they go just as many places as they did on the second song and it is about as cohesive, though there are some smooth grooves here and there along the way. Yes they do touch on some epic Thin Lizzy shit, but is is not consistent and looses the momentum. I am sure there are some people who are going to try to convince you this is the album of the year, impressive but not even close thanks to song writing too ambitious for it's own good.  I will give this an 8.5 .
Posted by Wilcifer at 8:39 PM