Bruit : " The Machine is burning and now everyone knows it could happen again 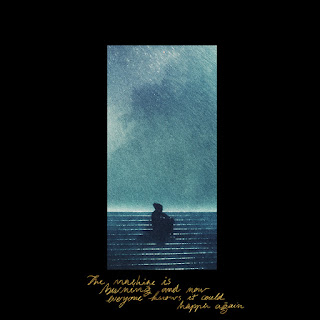 Post rock is the version of prog for coffee swilling hipsters. This band from France, veers from the normal sounds and expectations of what this sub genre can be. Lots of band's could learn from what goes down here. Yes there is plenty of atmosphere but it has an excellent beat so the song has a sense of movement, so it is ok to listen to after your first cup of coffee rather than just drone you to sleep  They also had an excellent grasp of dynamics here as well. The build on this song works really well. Now with all that said this song also really gets your hopes up for the rest of the album when in truth it is the best song on here., Not to say the rest of the album is shabby , it is just hard for them to live up to the promise this one seems to make. Though the second song does come pretty close to it
Things change to a great extent with the more folk like tone of the second songs that finds itself evolving into more of an atmospheric classical piece. It is songs like this that make you realize that post-rock really means prog for indie rock kids. When the drums comes in this song finds it's stride once again when the drums kick in and , they continue to show a great grasp of flow in their dynamics. "Amazing Old Tree " is the only song that feels like filler. Calling it a song is generous. as it is minimal in form, the melodies are almost not there and provide a backdrop to a sample that serves as the narrative. The narrative is about a tree. There is more atmosphere than form or function. The bulk of this piece drones on in one place.
The title track that closes the album is more along the line of what you might expect from a post rock band once you get pat the very cinematic lead in. It also shows how a great deal of post-rock really owes a debt to Pink Floyd. The languid beat has that smoky drain addled lethargy to it. The strong continue to add depth which is another mile stone of their sound. This has all the dynamic ebbs and flow this sort of thing should, it does not have the kind of movement you might want from it if you fell in love with the first two songs like I did, this album does however prove it can be one left on and allowed to play so I will give it a 9 for that .
Posted by Wilcifer at 5:09 PM