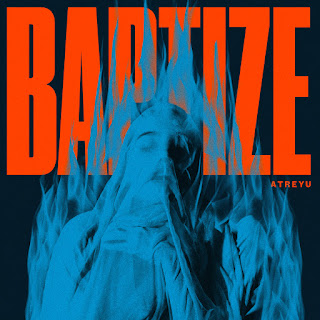 The album I paid attention to buy these guys was "the Curse".  Since then things have gotten slicker and more streamlined. The owe perhaps more to nu-metal than metal core. They still write catchy songs, though the title track that opens this album does not sound as dark as what I remember coming from these guys. The good cop bad cop vocals trade off is still at thing, though they lean much more in the direction of being melodic than not. The vocals in places get a little rap metal in their cadence. The hyper commercial nature of what they do begins to wear on me by the third song. "Broken Again" owes more to classic 80s metal, despite it's 2000s arena rock break downs .

They pay more attention to the songwriting when it comes to "Weed". It is not about the kind you smoke. A shame as I think their songwriting would benefit from that kind. The fact this is not dark enough for my normal listening also begins to eat at me midway into the album. The sung vocals have improved since that Bon Jovi cover. The clean guitar and ballad feel of "Dead Weight" is actually welcomed despite it's Avenged Sevenfold likeness. There is less Guns N Roses and more 90s rock.  "Catastrophe" is way too happy for me.  I would like "Fucked Up" but the chorus is kinda lame, though they do some interesting things here and there in the song itself. The pop punk moments on here are surprising , sometimes they are also a product of clever hooky pop songwriting, like on "Sabotage Me". Though once again the chorus is too happy. I do like the verses though.

I find myself coming to a place with this album where I have resigned myself to the fact they are now making music that is not for me, so I am having to review this album on the merits of are they doing a good job in the bigger picture of making music on a whole?  "Untouchable" might as well be Panic At the Disco, it just happens to have screaming in the corners. "No Matter What" is even bigger and more strongly leaning in the direction of pop rock with a touch of 80s metal to it. "Oblivion" has a heavier tone , by heavier they are not turning into Converge just more kick than what we have been getting, still a weird 80s metal/ nu-metal hybrid with the metal core thing a ghost of the past. I am not sure what to think of "Stay". My wife said it sounds like Coldplay. This is not untrue. There is more punch in the chorus. It is brighter than it is happier, there are worse songs on this album and overall it is not that bad of a song. This song is clearest indication of how the vocals have improved. The closing ...um anthem "Warrior" makes me think of Blue October. This album is well done in terms of sound and production, they are doing what they set out to do so based on that I will give it an 8.