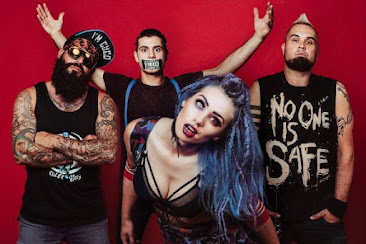 This band from Canada is driven by the charismatic and quirky vocalist Skye Sweetnam. They play something that is a poppy take on nu-metal. New Years Day and In This Moment are in the same zip code as what goes down here. To Skye's credit what she does is catchy. Sometimes almost too hooky for it's own good. Sometimes here voice holds a Gwen Stefani pout . She is capable of a snarl. The first few songs a entertaining blend of pop and metal, often a little on the happy side for me, or at least overtly bouncing, not unlike Sweetnam's boobs that are relevant in that sex is not something they are afraid to sell here though lyrically it is not overt.
The first song where it sounds like they are going for more of a metal sound is also the first song that feels a little more like filler. The pop dna of their song writing needs to be in play. Sweetnam has an excellent sense of  using the weaving patterns of pop melody that hip hop has influenced . She never raps but rides t he beat like a Niki Minaj might. "Cyclone" is almost too happy in places which offsets the more aggressive guitar punches. They do not have the same weight in the guitar production as say Issues does. Instead the guitars often blend with synth sounds making it hard to tell what is what.  The No Doubt influence I heard was not a mistake as it is more overt on "Run With the Giants" . It is unique in that they take the sound places that might have more in common with IWRESTLEDABEARONCE. The strength of their song writing can be felt again on " Overdrive". Her voice drips with a little more sex in places here.
They get grittier in the groove with |"Power and Control" . She does have a decent voice that works well with what they are doing and she pretty much sound like her own entity. There is a little more chaos on 'This Dance is Doomed"  The grit she add to her voice as the tempo picks up is pretty believable. Overall this album is a great deal of fun, sure there is a tinge of sexy pop in the pot but that is not the only thing being stirred. I feel as a singer Sweetnam is capable and a legit front woman.  I will give this album a 9.
Posted by Wilcifer at 7:54 PM