Dinosaur Jr : "Sweep It into Space" 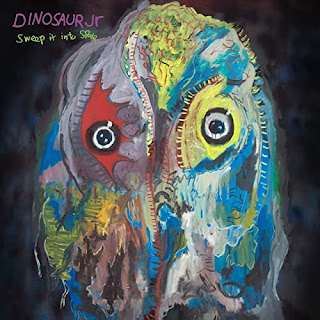 These guys are back and upholding their sonic legacy well. The second song "I Met the Stones" has an almost metallic chug to it. It is about planets not Mick Jagger. I first listened to this album at a more moderate volume , and I think cranking through head phones might do the mix more justice. Unless they are going for a more raw almost Neil Young like sound. This mix does not do some songs as well, "To be Waiting" is an example of this. Though it does still feel like the 90s so , perhaps that was all they were aiming for. The vocal melody makes up for a lot and is pretty much what sells me on it.  While not the same kind of hyper hooky alt rock that made it on the radio in the 90s , "I Ran Away" has a bouncy enthusiasm that almost captures it.  Lou Barlow takes over on vocals for " Garden". He as a more melodic style so it provides a nice dynamic shift.

"Hide Another Round" has more of the upbeat jangling bounce to it.  If you were to ask me to play you a song that encapsulates what I think Dinosaur Jr should sound like, I would play you " And Me" . It has all of those qualities. " I Expect it Always" has more energy and a rowdy reckless rock n roll swagger to it, but I do not think it is as good of a song, thought not bad by any means. "Take It Back" is melodic in an odd manner I might not expect from these guys. Keyboards play a larger role than they normally do for these guys, which is ok every now and then. It is also upbeat but in a manner that is a few steps left of center for these guys .

"N Say" is upbeat without being too happy. This makes for what I want to here from this band when they begin to press on the gas a little. Overall this album goes to show these  guys keep getting better when many of their peers from this era just dial it in. With all the fanfare Weezer has gained over the years, I think if you compared the output of these two bands Dinosaur Jr would be more deserving of praise when it comes to being consistent song writers.. I will give this one a 9.5.