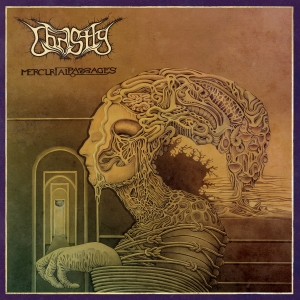 Finland has always been know more for their black metal than death metal. Before you start commenting with the names of all the death metal bands in Finland, I know there are a few it is just not what comes to mind. The first song had a great deal more atmosphere and a more doomy feel, where the second song, kind of plays more along the standard death metal lines. The  vocals are at low growl, which lean things more into the death metal side of the fence. In fact the way they throw themselves into the chug of  "Sea of Light" the more certain I am that they are at least on the  Incantation side of death metal. In fact they might be doing Incantation better than Incantation is these days.

It is when the albums gets to "Perdition" that the heavy handed element which normally burden the genre begin to settle in. The stiff straight head snare pattern that I normally dislike in death metal comes into play. This bleeds over into "Parasites" . They are skilled at death metal. The problem is what they were doing on the first three songs was better and less common place. The fact they had a fair amount of atmosphere on the front end of the album balanced out the hyper aggression that can make death metal more one dimensional than other sub genres. They make this right when the throb of darkness returns to their sound on "Dawnless Dreams" . There is still enough like the ripple of tremolo picked guitar to keep this rooted in death metal, but it is done in a way that retains a sense of dynamics and makes for compelling songwriting.

They kind of split the difference between the expected aggression of death metal and the dark creepy atmosphere they have proven themselves capable of summoning during the albums most engaging moments when it comes to the last song. I do not feel they do this as well as they did on "Dawnless Dreams" but as far as death metal goes it is something I will listen to again. I will round this down to an 8.5, this still places them above the masses in terms of death metal coming out these days , though I think they are at their best when devoting their sound to the darkness , rather than trying to get overly aggressive.