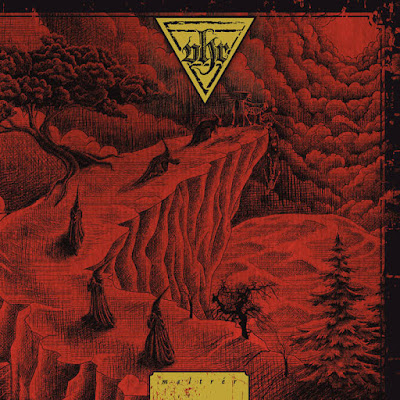 This German band is not what I expect from Fallen Empire as they are way more melodic. There is plenty of atmosphere. They use keyboards well and combine traditional black metal with sweeping sonics that encompass a sound of their own making. The vocals are crazed growls. They are not afraid to really get metal and gallop. There is even a breakdown in this song that shows a powerful sense of dynamics. The drums on "Vertigo" slow down as the band hits a more throbbing groove. The vocals are a throaty mid range. I can begin to hear the German influence when they hit a marching beat.

The title track almost starts like a Metallica song.It throbs more than Metallica, though the harmony guitar melodies sound like a marginally more depressed take on classic metal. It does go into more of a traditional black metal blast beat here. When they keep the going to storm into "anima sola" the sound more like everyone else and I hear less of their distinctive voice that we got earlier in the album. When it gets to what would be the chorus they slow into more of a thrashing section. This reminds me more of Possessed. The chanting that is sampled in towards the song's second act helps re-establish the needed atmosphere they had begun to forsake.

"Nachtfall" finds the band slowing down going into the song. This gives them the breathing room they need and you can actually hear the bass. Before the minute mark they are back into the blast. This makes them sound more or less like the bulk of other black metal bands. There is a sweeping gallop to it and the drummer prefers double bass to blast beats most of the time which certainly helps. There is a cool unexpected shift into more of a groove about five minutes in which is what the song needed and sets them apart. They need more of that. They close the album with something slower than the pace most of the album has been at the song fades into the back ground so nothing to make me look away from the computer to take notice, but from what I did key in on the guitar melodies are on point and it doesn't suck.  I'll give this album an 8 , if you like black metal that is straight forward metal, but still adds a spin of it's own then this is worth a listen.