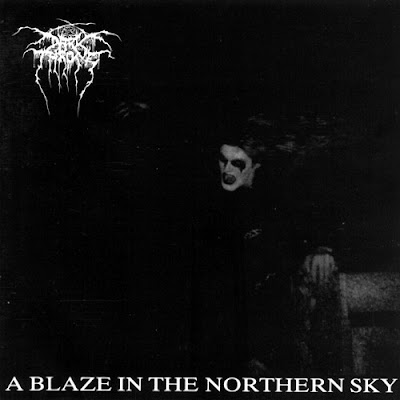 Here is where we are going to look at an album that has long been considered at classic and ask how well has it stood the test of time. This album was released in 92 and most of the time we dig back a little further than but this is part of what fans call a trilogy that has grown into legendary status. So what happens when you strip that hype away and take the songs for what they are without any pretext.So lets have a listen and see. It off course starts with chanting and ambiance. Then metal kicks . This was recorded in 91 so it has the kind of rawness that bands have been trying to replicate ever since.There are chaotic bursts of speed but the bulk of the song is not a pure blast beat frenzy. In fact much of the song kind of stomps along almost closer to death metal. It grinds at more of Celtic Frost speed toward the end goes into the blast beat that is now thought of as traditionally black metal.


"In the Shadow of the Horn" finds them in more of the Celtic Frost like thrash. The solos have a more Slayer like chaos to them. Then there is the weird passage where they clean guitar is oddly layered over things. It's interesting to go back and listen to this album as I had forgotten about the guitar melody to "Paragon Belial" and the odd angular twist to it. "Where Cold Winds Blow" is totally the kind of feral blasting black metal rawness that countless bands are trying to replicate. It  could be argued the most iconic songs on the album are the last two. The title track blasts right into things with an almost punk energy. At a minute into this it shifts into a more almost classic metal groove that throbs as much as it gallops. Culto's vocals on this song in my mind defines what the large majority of black metal vocalists are going for. I think this song gets more powerful when it slows down. Fenriz's spoken word sections are kind of silly but the rest of the song makes up for it.

"the Pagan Winter" is yet again another display that even a black metal classic like this one can not live on blast beats alone and the song ebbs down before going into more of a triumphant gallop.Through out the course of the song there are moments with it speeding up with a melody that keeps repeating as a theme the song goes back to. Overall for what this album is it's pretty solid and has some strong songs, though it is not perfect so I am rounding it up to a 9. It might be considered the first time they played black metal, but I was just listening to it in terms of how it stacks up when you take that context away. A 10 is a classic, so it falls a little short of the hype that elevated it to that status, though it is easy to hear how if you are punk kin wanting to get into metal this could be an entry way to that.