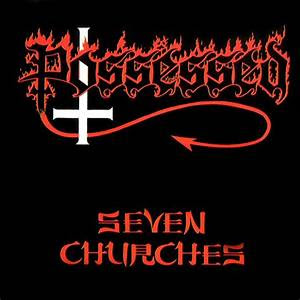 Here is where we go back and listen to albums that are supposed classic and see if they were really as good as we thought at the time and ask how well have they stood up. Credited as one of the forerunners of black metal formed in 1983 this album was released in 1985. This was also the first band of Primus guitarist Larry Lalonde. The opener sounds more thrash, but you can hear why Dimmu Borgir has credited this album as having influenced them. Bands like Samael, Falkenbach and Rotting Christ have name checked this guys as an influence. The vocals on the song"Pentagram" sound more like Venom than the harsh growls of the first song. The drums are more thrash than what we consider black metal today. "Burning In Hell" is almost sloppy due to it's speed. While the album that followed this one was criticized for being not as aggressive as this one it makes me wonder if it's as bad as originally thought. They do sound a lot better when they slow down into the chug for this song. More like "Bonded By Blood" era Exodus.

There is more of a Slayer feel to "Evil Warriors". The vocals would not sound out of place on a modern black metal album, though they are a little more punk. This song might have been ground breaking at the time , but now it feels like warmed up Slayer. I do like the attack of the title track despite the fact it speed up into that stiff punk like snare I hate in metal, and to be honest am not fond of it in punk either. Lyrically this song is not as strong as the others. The harmony runs the bass and guitar do are pretty impressive if those kinds of chops are what you are into. The guitar might be this bands biggest asset , but the bass playing is not far behind it though sits back further in the mix than say Atheist. "Satan's Curse" is pretty straight forward. The chorus is really punk, almost reminds me of Suicidal Tendencies. I think "Holy Hell" is a better song, though it's more in the Venom vein.

"Twisted Minds" kinda feels more like that place where death metal and thrash once met. There is a cool mosh riff under the guitar solo, but you know the rule around here is cool riffs alone do not a good song make. "Fallen Angel" has more anger in it's attacks. The drums are not the greatest , but they get the job done. The song "Death Metal" is more thrash than death metal. It kind of blasts by without leaving much of an impression even after going back to listen to this more than once. I'll give this album an 8, it's good, but not a classic as it doesn't even hold up to say "Altars of Madness" .