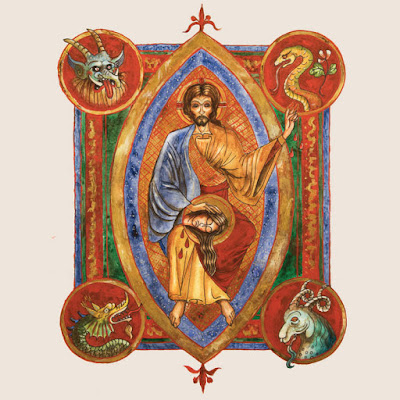 While this band from Brooklyn often intersects death metal into their brand of black metal I think they are more interesting than your average blast fest. There is a more Dissection like thrash stomp to the verses of the opening song. They are able to lash out with a mean spirited attack while keeping the arrangements varied. The second song is a little more straight forward and doesn't grab me with the same urgency the album opened with. There is an odd almost disco like beat three minutes which is followed by an interesting break down. But the rule is cool riffs alone do not make a good song. They begin to remind me a little of Sigh in the almost rock n roll feel to "Vision of the Merkabah"The song sounds like it wants to go in a direction where the vocals are more sung than growled but this doesn't happen.

"False"falls out of the previous song with more of a majestic gallop in it's step. The vocals feel a little less purposeful on this one. They do lock back in towards the end of the song and things feel a little Dissection like. The filler comes when the band begins to rely on speed more than the sense of songwriting that draws up in on both "Second Death" and "Upon Funeral Stone" . "the Hope" is a little more balanced with a melodic interlude interjected. Things take a on a more regal march with the last song that returns to a more Dissection flavored affair when not blasting off. To the band's credit that do not sound like they are hipsters from Brooklyn and seem like they have an honest affinity for metal that some of the bands from that region seem to have or have lost.

This album is largely enjoyable and I think a non discriminating fan of black metal will be less picky on points that I hold to greater scrutiny. It's like if Mutilation Rites was influenced by Dissection. I love Dissection, and already own those albums and while they do not rip them off like say Cloak, it would impair the chances of me needing to own this album since I already have all the Dissection and will just listen to those if I want to hear that kind of thing. Regardless it is well done so I'll give it an 8.5.