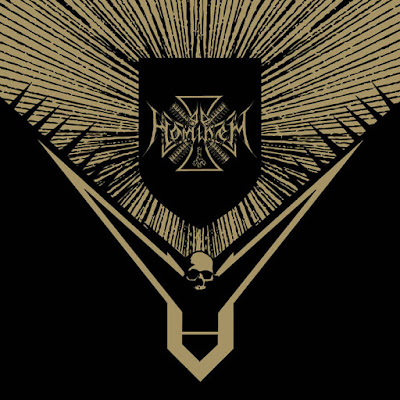 This project out of France seems to confuse people on multiple levels. People don't know who else is in the band aside from Kaiser. Lyrically it has been implied that the lyrics are political despite Kaiser say thing otherwise, this may or may not be due to the fact it implicates them as being National Socialist.Kaiser said this is untrue due to the fact the songs don't deal with the Aryan race but a distaste for all humans.He wrote the songs so I guess he would know best. Though the inner webs will tel you it happened on the album "the Planet Zog". I am really only paying attention to the album at hand and it is a mean fucking ripping son of a bitch. There is a slight German hint to some of the vocals on the song "I Am Love". Double bass buries you on the song, "Consecrate the Abomination", before the find a convincing groove.

These songs a very compact, almost punk influenced in their wild aggression that goes for the throat in a very straight forward manner. The first song where they throw a ton of blast beats at you is the title track. The drumming on this album is fan-fucking-tastic. It would be all the more impressive if Kaiser did indeed play everything on this album. There is more of a Shining feel to the black n roll of  "Goatfucker". Despite some of the song titles they seems very serious about what they are doing. Sure "Cult is Alive" punk Darkthrone could be a reference point , but there is a bigger more militant sound to what is going down here. With this being the case it is worth noting that these songs sound pretty solid from a production stand point. It doesn't sound like the amps are blown out and I would not say this is raw, but it is aggressive. While they don't drone, they do play off of a riff for what sometimes seems like a long time. It is not until "Imperial Massacre" that there straight forward nature begins to wear on me.

"Bomb the Earth" is just a blast fest like all the other blast fests. When double bass is added to pound the point into your head its clear there is a fair level of conviction behind it. There is a little more atmosphere leading into "You Are My Slut". The vocals alternate between a low spoken word approach on the verses and then building up into a distorted rasp. They close the album with "Vatican Gay" that has a more pronounced thrash chug to it that is accented by gang vocals. I'll give this album an 8.5. It's possible like the new Ilsa the more straight forward songs will grow on me. These guys are certainly worth checking out if you want black metal with a dense punk tinged thrashing to it.

This album is being released on April 13th by Osmose Records.