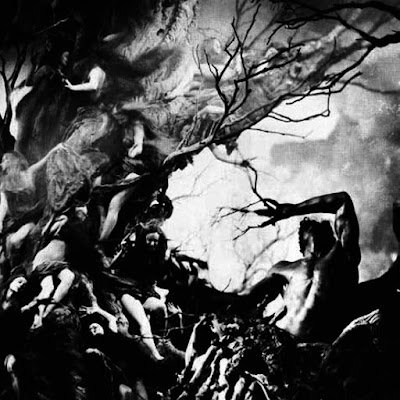 This is the 10th album from these Austrian black metal maniacs. The vocals are crazed. Sometimes they are sung and when this happens it sounds like Emperor on a whirl wind of drugs. The varied layers of vocals give them a personality of their own. The guitars are also layered sometimes two different parts that seem like they are working against one another, but given the chaotic nature of what they do this works out fine. "Sword of Silence" has more of a thrashing groove but the weird Mayhem like vocals keep things weird. By the end of the song it has taken more twists and turns than expected. This album stays focused on Satan and has many samples from horror movies to remind you of this fact. All of the songs are in the three to four minute range.

"the Cold Breath of Satan" starts off a little fast and then feels like it is more difficult for them to get focused enough to draw you back in. "None Before Him" is a much better song, it is more experimental with the bass driven groove , but it all works here. The big chorus of overdubbed vocals creates a more majestic feel. "Olden Days" has it's vocals a little more sung but angular chaos abounds. Some one left a comment on their Bandcamp page that says this album reminds them of everything they love about "Grand Declaration of War" and I think this album is more manic than that, really the only part that sounds like Mayhem is the vocals and if you are going to compare it to Mayhem its more like the early Attila days. "Hymn to the Flaming Void" is less though out than the previous song. The first minute and a half in their is a cool part, but it quickly shifts into something else like most of these songs.

By the time we get to "Christs Descents Into Hell" they have jerked you back and forth like a less proggy version of Sigh. "Ancient Fog of Evil" is a little darker. The vocals don't sit as well over the dissonance as they do on other songs.I'll give this album an 8.5 , they are goo at what they do and their playing got them that high so it was an enjoyable listen, I appreciate that they think beyond the blast beat, but it doesn't feel like an album I am going to return to a lot if at all. If you are a fan then go ahead and round it up to a 9.