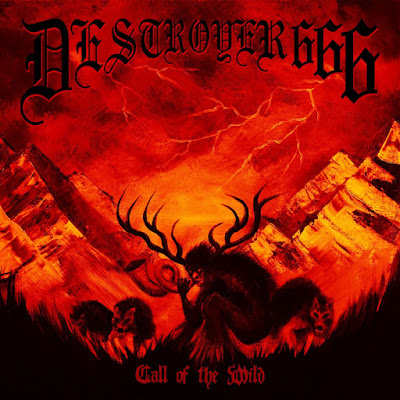 Warslut is back with something is almost more like W.A.S.P than black metal, though the opener does vary in it's level of blackness from passage to passage. But I'll grandfather it in as it is as black metal as Venom...though closer to "Calm Before the Storm" than "At War With Satan".  They guitar sound is dialed in. The vocals are standing on the monitors and in your face. The vocal performance is executed in more of a 80s thrash shouted style of singing . There are some black metal tinged rasps thrown in. The drumming is very animated, but where it needs to be. I think the guitar benefits more from when things are not as busy, considering the speed these guys are thrashing at.

The vocals to "Stone By Stone" remind me of "Captor of Skin" when they are more rasped. The title track is like a mix of Venom and Judas Priest. Not as catchy as the first song. It is fun. I think the rapid fire guitar parts come across as a little bright in their pyro-Technics. This ep is not as dark as the "Wildfire" album though it takes you back to the classic days of 80s metal so will appeal to those who liked that album. "Trialed By Fire" starts off with more delicate guitar and a spoken word muttering in the distance. I think it's a wise dynamic move as the first three song moved at a similar tempo so a fourth song of that kind would have started to feel like the same old same old.This song also feels the most black metal of the four to me.

These songs are really well done. My only disappointment is I was hoping for a full length so I will have to go dig up some of their older albums. I'll give this one a 9. It shows the most growth on the production end as their is a bigger sound that allows for more attention to detail and proves this band can stand shoulder to shoulder with any metal band. I look forward to catching them Watain next month.