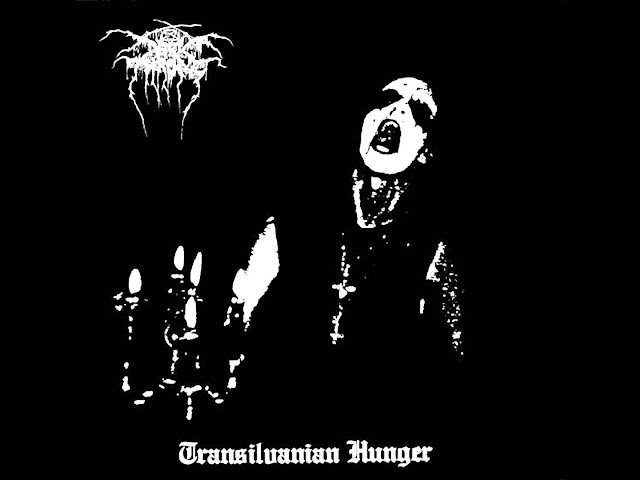 This month we already went back and gave another listen to Darkthrone's "A Blaze in the Northern Sky" album to see if it does indeed hold up over time. All too often we regard album's as classic without giving further though to if they really are , So here comes this one which is often of as being part of a classic trilogy that also includes "Under a Funereal Moon" . Varg from Burzum, wrote the lyrics to half this album. So hipster black metal fans who are into Darkthrone , but don't like Burzum for whatever reason, well there you go is all I feel like saying. These days anymore and you get called a racist. Opening with the title track they hit you with what you have come to now think of as black metal. If you don't at least know how pure and cold this song is then you don't listen to black metal so I am not sure why you are even reading this.

"Over the Mountains and Through Thorns" just kind breezes by you in a blasting breeze. This demonstrates this album's hypnotic quality to where there is a throbbing drone to this album. "Bard of Satan's Sun" has this quality to some extent , but more metallic anger in it's attack so the intensity level is more keyed up."Castle In the Distance" has a dark pulse to it. It works off a tremolo picked guitar riff that becomes more like a wavelength when set against the crash of the cymbals. When we get into "Halls of the Tomb of the Fog Kingdom" they songs begin to blur together in their more uniform pulse. It's easy now to take this for granted since up until this point there was not much like this now every black metal band sounds like a variation of it.

"In a Hall With Meat and Mead" is a little repetitious. The best thing about the song is you can hear the bass beginning to cut through.Of the two songs that close out the album the last is the most interesting as the vocals have a little more anger to their rasp and give the feel a little more aggression where the song before it pretty much does what the others are doing . I'll give this album an 8.5 in regards to how it stands the test of time. This eliminates the it was a ahead of it's time argument, because we have already passed the time it was ahead of and now looking at how it sounds right now. Still it's a pretty decent score held back by the uniform mature that causes many of the songs to sound the same.