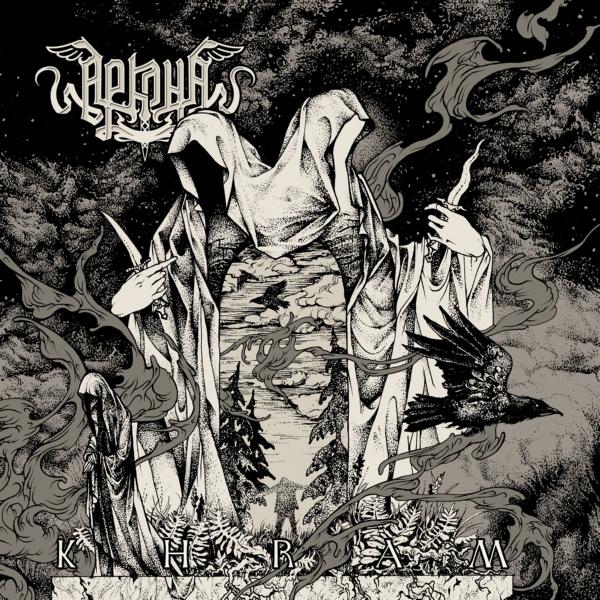 This band has cleared up any problems I have had with folk metal. The majority of what I have come across sounds like pirate drinking songs are have to much frolicking in Shire. I play pen and paper Dungeons and Dragons twice a week and read tons of epic fantasy from Glen Cook to Erickson, so I am the target audience for this kind of music. The problem I have with the frolicking and the shanties is they are too happy and I need my metal as dark as possible. The ninth album from this Russian band delivers what I need and when they do begin to gallop off into the sunset, it is not as unnerving as it has already been contrasted by more dark and heavy passages. The album opens up with chanting so creepy I kept finding myself turning around to see if there was a witch in my closet. They show up ready to do battle and don't get over indulgent into the more LARP like elements until the seventeen minute second song. I tend to not keep many sprawling seventeen minute songs in my iPod as they would take up the entire car ride to pretty much any where I go, but for what it is the song borders on being more progressive mid-way through and reaffirms their chops if you were unsure of them.

The song that follows is twelve minutes. It opens with a tense strum of cleaner guitar, before layers of guitar begin to come in. Midway into the song when they break from the dark drone of the verse riff to bury you in a barrage of double bass it works because they have already offered a range of dynamic colors. The harsh vocals are growled in a more throaty death metal voice. The drummer and the guitars are a well balanced blend of technicality and angry metal emoting. The title track has a darker throb and the album begins to remind me of Kamfar, though it eventually winds to into something more Moonsorrow like. The double bass continue to keep things moving, though the song works off a building drone. Rather than a shift in the arrangement, layers like folk instruments and sung vocals float in and out. The pay off which is you know is coming is a shift in tempo when the thunder of drums sweeps up the song. This leads to a call and response between the growled make vocals and the harmonized female vocals.

"V Pogonie Za Beloj Ten'yu" is more straight forward in it's bold gallop. At this point it's clear these guys are more black metal than they are folk metal. Midway into it they give the song some breathing room with a dynamic shift into some ambiance. There is more of an electronic element to this passage than expected from these guys. This is what I want for bands to do the unexpected. Hearing hundred of bands over the course of a month you get tired with them sticking to the script. It would really be different if I was not sure that they were going to bust back into the double bass. This of course happens in the songs final two minutes. There is a piano intro to " V landonyah bogov". The guitar slowly begins to fade into the picture, before fully busting into the metal at the two and a half minute mark. The dry mid-range rasp of the male vocals is dominant, before the verse ebbs down into a melodic pondering.There more progressive flare to this song keeps things continues to fine the band exceeding expectations before the shift into more of a groove that give way to the inevitable blasting. I am fine with blast beats on this album since it is not their only stock and trade. It never feels like they are just taking the easy way out.

The album closes with "Volchitsa". The beginning of this song might fool you into thinking you are listening to Dead Can Dance until the guitars buzz in. Dark and melodic, the drummer proves he is brilliant even when playing to something more smoldering and introspective. I'll give this album a 9, it's in the iPod though considering some of the song lengths see how it sits there. If you want some black metal that is melodic with folk elements then this is the album for you.