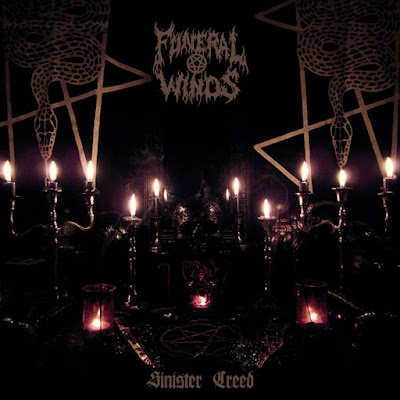 Now the question that will be asked of all black metal bands this month is ...what are you doing differently? The raw jagged guitar thick band from the Netherlands attacks you with might be aggressive enough, but begs the question what else can you do? Can you write an actual song, is certainly a concern. They have been doing this since 1991 so I hope they have written a few real songs since then. The opener breaks down into a slower more epic metal moment, before speeding up. It sounds like they are obviously rooted in thrash and punk.Since 91 they have only released four full length albums so it is hard to imagine they have playing music seriously since that point. Another fact to take into consideration is how black metal has changed since then. They thrash out with a little tighter focus on the second song. It reminds me of Watain's more fast and furious moments, one would assume they were an influence upon Watain. When they lock into the more thrashing headbangs this band is at their full powers.

"the Arrival" has a more animalistic intent in it's snarl.The title track is not far removed from this either. It's at this point that I become curious as to what these guys sounded like on their first album. This is fitting to get into this history of this band since after all it is Black Metal History month. They has more of a thrashing sound like Posssessed. It seems closer to death metal than black metal. The vocals are still raspy in a very black metal way, but in 98 the second wave of black metal was well under way and "Storm of the Light's Bane" which most people will cite as Watain's primary influence was already out. I don't think it's totally insane to wonder if perhaps the roles might have been reversed and these guys thought "Hmm Watain is certainly selling some albums, we have been doing that kind of shit for a while now, lets tweak somethings in the studio and bring out that fact. "Blood" is another fiery feral speed fest.

The get my attention back on "Black Moon Over Saturn"  there is something that feels more death metal in the chug to this song. They blast back more aggressively on "Seven Arrows Knife and Flame". I little past the midway point it shifts into a slower more confident riff.  At seven and a half minutes the final song is the longest which is not uncommon. The vocals have more of a croak to them. It starts off as a blast fest so the slower croak of the vocals helps to balance it out. This delivery also helps the lyrics to stand out. this album is pretty solid for what it is I'll give it an 8, though not sure how much mileage I'll personally get out of it.