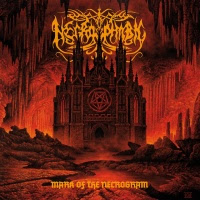 The opener from the new album by this Swedish band finds them leaning more toward the black metal side of the blackened death metal equation. It is doubtful they sat around and said of lets throw in the death metal here and there ,as it feels more organic than that. It is well produced and executed. The guitars and drums are at the top of their game. While I am impressed by the first song, there is the fear that this will run into the problem most bands of their ilk run into , which is blow their wad on the first song leaving you asking "Well what else can you do?" The band admitted to lifting their name from the Slayer song and lyrical they are a mish mash of vague satanic sentiments about devil's children with little in the way of actual occultism to back it up. The few passing references to the real occult elements are in such a passing way it's still the normal metal trappings.

They continue to show taste in the guitar that opens the second song. It's a cleaner tone that sets a mood rather than just running you over from the jump. This song eventually goes for a more of a thrash tinged gallop. If you are into guitar solos these guys do them well. While I am not as impressed by the second song they know what they are doing. It is not the most cvlt thing going, in that it will still appeal to fans of mainstream metal who own Amon Amarth albums. You can hear the Swedish death metal influence , perhaps more than the Dissection, which is buried under more layers until perhaps the verses of "Tsar Bomba". It's certainly a catchier song that owes more to "Reinkaos" that the "Somberlain". They return to the clean guitar that opened the song in the middle. So they get credit for trying to have a wider dynamic range. There guitar solos here almost sound like synths.

"Lamashtu" is about some kind of demon queen. The song itself indulges in a great deal of guitar flash and blast beats. This album is another example of how production alone can steer songs toward another genre. If this was more lo-fi it would fall closer to black metal. The song"Sacrosanct" chugs long the same lines as the previous so I am more impressed by "Pesta" since it has more of a dynamic range. They slow into more of a groove for "Requiem For a Dying Sun". They are back to a more series blasting on "Crown of Horns" has a more thrash like attack. They allow for more breathing room on the darkly melodic "From the Great Above" . The vocals carry more of a thrash rasp on this one. This album is very well made, preformed , and written. A little more on the Dissection based than what I need , but done in a more original manner than Cloak. I will give this one an 8.