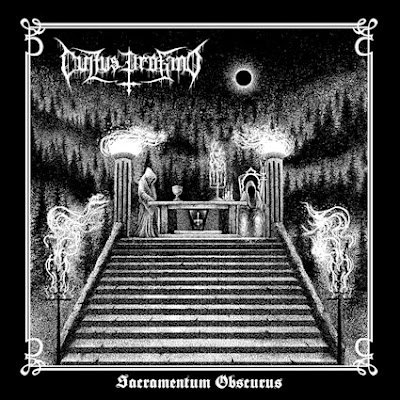 These guys are not redefining black metal, but they excel at delivering the classic second wave of it. Namely the Norwegian brand despite the fact this duo hails from Los Angeles. The vocals have an almost androgynous quality to their higher rasp. It sounds like a witch being burned alive at the stake. Sure there is tremolo picked guitar and blast beats. If done differently this might not work for me, but they make me a believer. I feel the urge to headbang at my computer a little more on the second song than I did on the first. For this to be their debut album they certainly carry the feeling that they are assured in what they are doing. The blasting does begin to become a bit of a blur by the time we get to "Ceremony of the Black Flame". The drumming is pretty impressive though can't say drums alone ever carried a song.

None of the song reach over the five and a half minute mark which I think is wise as it would begin to numb you out into a drone at that point. This album is really well recorded. Only raw in the emotional sense rather than sonically. The guitars create the atmosphere on their own, in this way the bands owes something to Darkthrone. "Lord of Ages" is the first song that kind of fades into the background. It's not bad just not captivating. There is more of a thrashing punk feel to "Ignis Altare". It is very aggressive though unlike thrash doesn't seek to really hook you in with anything. I lower growled vocal appears on this song.  "An Offering to the Prolific Goat" eventually slows to it's own throb that proves more effective than the blasting when it comes to keeping my attention , though more often than not these two feel the need for speed. They regain their songwriting legs on this one.

The vocals are a little more accented in the passages where they are not blasting through "Forging a Covenant".  This song begins to sound like all the others before it. They do back off slightly to allow for more breathing room in the songs final minute before speeding back up. The song "Awakening the Stzyga" just kind blast by in a rather non descript fury. The last song that is named after them ,has a little more emotion in the vocals and goes through a rapid series of varied gallops. I'll give these guys a 7.5, they are good at what they do, I have already heard what they do and it doesn't feel like there is that much of a different spin on it. If you like your black metal pure and not fucking around with the formula then this album is for you. It comes out Feb 23 on Debemur Morti Productions.