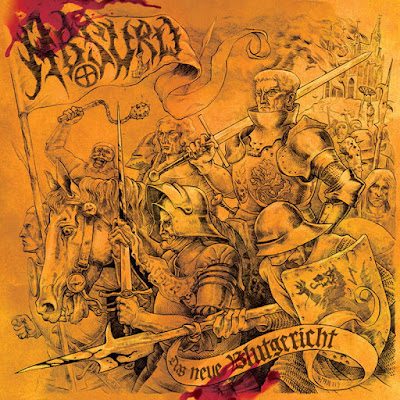 This band goes back all the way to the early 90s . They are mentioned in some detail in the book "Lords of Chaos". Metallum suggests that Hendrik Mobus is the only original member of the band, other accounts say this band is spearheaded by his brother. I am not going to get into the band's colored history, despite this being Black Metal History month as that is an article unto itself. So I am judging this album just on the merits of it's music. More black metal than some of the previous music I have heard from these guys they still lean heavily on punk to the point of almost eclipsing the more metallic core of the sound. There are more melodic than I remembered them being. The drumming is pretty decent and the montone rasp of the vocals proves to be one of their weaker points. German metal often strikes me as being stiff and these guys give their songs a little more breathing room often due to the guitar solos. They solos are not stellar but they work with what they are doing.

"Die Galgenbruder" has the first riff I am really sold on. It has more of a groove to it. The vocals don't do much in terms of complimenting , and go off into more of a rant. But lets face it with half the extreme metal out there the vocals are a static layer that never seem to really be given a ton of thought. This is not to say this is an excusable direction this kind of music has reverted to but it is a fact. They do enough to escape my rule of "cool riffs alone do not a good song make" by layering it with some melodic guitar solos that contribute to the mood rather than just wanking. "Strum Bricht Los" has more of a rock n roll feel, though there is a slight pagan slant in the way it swings like a viking drinking song. Another thing this album has going for it is the fact the songs are fairly concise and don't go off on long sprawling drones. They are not a droning band but cut from a cloth closer to rock n roll than early Darkthrone.

The guitar players care about what is going on here, it's like the vocalist came into the studio drunk and just did whatever half the time. Ironically this album is much like the new "Black Panther"  it's pretty mediocre, though I am going to guess will appeal to people wanting to believe in it's supposed message , which is more veiled in some cases than others. To me the drunken pirate vocals are something to be endured rather than enjoyed. They come close to working on certain song. Sometimes they are more sung than others. They are more punk than a metal growl. The drummer drinks his coffee and throws in some double after a while. The guitars are typical metal at this point, though when they try to go a tremolo picked/ blast beat path they come across more punk so they are better off sticking to the guitar harmonies. Their gallops also work for me, though I think many fans of pagan metal are going to be too far into the woods to hear this album, so if a tree falls? By the time it closes with the more fast and furious "Wolfsblut" I am pretty much done with the vocals so the more straight forward punk sound isn't doing it for me. Due to the vocals I'll round this down to a 6.5, if you are into these guys it might not phase you.