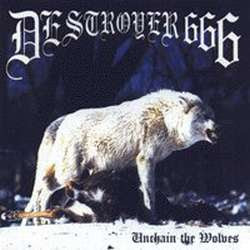 The first full length after coming from Bestial Warlust there is a darker sound than what we have heard from the band's more recent effort. The vocals are harsher and a more feral hatred possesses their rasp. They are more black metal than death metal and and over all more sinister mood hangs over what is being done here. They are not blazing fast but have a very determined march to the tempo.  For 1997 this is pretty fucking heavy. The mainstream metal world at the time was pretty distracted by nu-metal at the time this was released. In America hard-core was also on the rise which would later lead to Myspace Metal.

The Venom school of thrash that is similar to where the band is now , was also present here. As is the brand of thrash that has more in common with early Slayer. There is even a more pagan gallop of "Tyranny of the Inevitable". The vocals take on a lower croak here. The guitars are not as blazing on this album, making me wonder if they developed more of a coke problem later on. Sometimes the vocals here feel a little more though out than others. There is a more black metal feel to the blasting of "Six Curses of a Spiritual Wasteland". The vocals might be the best part of this song. The drums and the guitars seem to be playing against one another. I am also a fan of getting drunk on the blood of angels. the strangeness begins to creep in on "Rome Wasn't Destroyed in a Day / Unchain the Wolves" as it starts off with synth strings creating atmosphere around a spoken word drone. Once it kicks in it's more punk rock in the song's attack. It goes into a slower gallop and the mix provides enough atmospheric effects to keep things surreal.

The last actual song is "Damnation's Pride". The vocals once again take on more of a croak here. Musically it's pretty straight forward. The drums are the least interesting element to this song.  I'll give this album an 8.5, it's pretty solid with interesting production choices. I like the fact it's darker than their current song even if it's not a catchy.