Cynic: "Kindly Bent to Free Us" 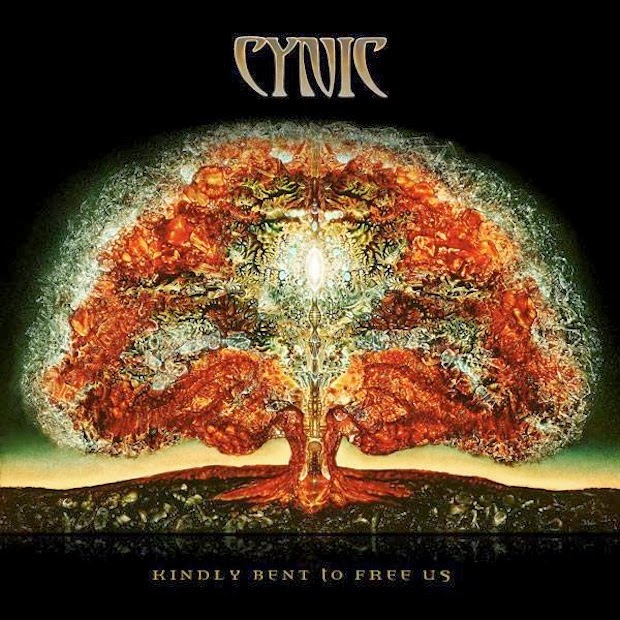 Entertaining as it might have been at the time the "Carbon Based Anatomy EP" floated off further in the elf realms of Sigur Rios than I could digest if they maintained that trajectory.Cynic has not forgotten what side of the bread is buttered on in terms of their audience. The idea of them being a metal band is still expanded to it's breaking, though a heavy groove sticks to the opener, it becomes more hard rock than metal, and a very far cry from their early work.

There is a Rush feel to many of the riff, these give way to bass driven grooves in the same zip code as Dredg, who seem like a more fitting tour mate for the band at this time than metal bands. Sure it lacks the heft of "Traced in Air" which saw the clean vocals coming to the fore front, and they do even more so here. The vocal melodies are no longer counterpoints to the prog whirlwind, but given the space to flourish on their own.I no longer have much interest in radio rock along the lines of Muse, which is comes close to be I can appreciate when it is this well done.

By the title track, I am sorting through what works for me and what doesn't and then they hit a section that is "Traced in Air" and works for me as that album had the right balance of shred, melody and teeth. Too often prog bands these days forget the teeth and end up sounding like Journey...yes I am looking at you Dream Theater. I think their guitar tone darkening up helps them out. This is more of the guitar players show here, though drummers and bass players can find plenty of make their jaws drop.

They continue to experiment with new sounds and production wise this album is pretty pristine, I could put a beefier guitar on my wish list , but oh well... The vocal's are more front and center in the mix and aren't as weirdly layered as they were on "Traced in Air" which is the album this is really going up against for me. "Infinite Shapes" the vocals take on a more mature melody that hold their own. The sit against the more angular twists and turns the band excels at. Some of the guitar tones remind me of Pink Floyd's Animals and other they are not as warm and have more sterile precision to them.

"Moon Heart Sun Head" is wisely guided by the vocal and the music returns to a darker more introspective place. The rock god solos are in full effect and I am sure that will draw in a certain sector of Progpower fans. I don't think this album is going to win any fans over who did not like the band to begin with , primarily for not being metal enough or pretentious .

They keep trying their hand being a rock band on "Gitanjali" which almost sounds like a King's X song to me, in the way the punches hit and some of the chord voicings. "Holy Fallout" finds the band closing out the album  back in the well balanced "Traced in Air" zipcode, though this song and this disc as a whole is a slightly grayer shade , it would be hard pressed around this site to call it dark, but more solemn. This is going to grow on me, the more rock direction at times threw me off, but this album has been on repeat all morning so that says something in its defense. "Traced in Air" is a pretty high bar for it but it holds up pretty well even with slightly less teeth to it , so it gets a 9.5.