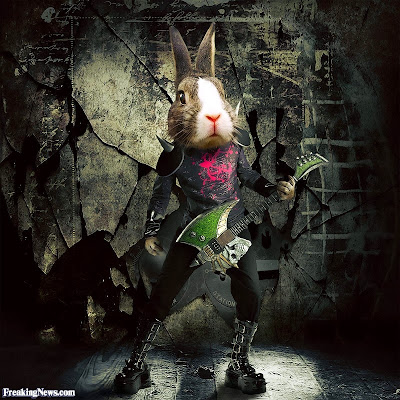 If you don't know what this is by now I am not sure why you are reading it, hitting shuffle on the Ipod and seeing what pops up.

"Ramble On" by Led Zeppelin- One of my old bands use to cover this one, and I would ask the crow if they had their 20 sided dice ready. This is one of their many tributes to Tolkein, which is a strong argument to put the Sabbath vs Zeppelin debate to rest. John Paul Jones is the star of this show for sure.

"Movie Screen" by Chelsea Wolfe-No big surprise here. I like the trip hop element in this song and truth be told stumbled across Chelsea Wolfe in connection to the whole "witch house" movement that kind of came and went in electronic music. Live I think this songs comes across even better as in the studio it sounds like she is sometimes holding back.

"the Unknown Knows" by Voi Vod - A tragically under rated band that merged from the thrash scene of the 80's, they are one of my all time favorites. Like most of the under dogs I root for these guys had a lot going against them as they were too weird for your average Slayer fan at the time and they were from Canada. so they eventually began to give into being Rush's country men and things got proggy, even on "Nothingface" which was a break through album of sorts for them. Then grunge came. This song is one of the albums heavier moments , but still is filled with some of the punk sneer they tend to carry like Killing Joke. Way ahead of their time, if this came out today it would still sound current.

"Black Moon" by Killing Joke - Speaking of Killing Joke, "Pandemonium" has always been my favorite album by them as it blends melody with the stark industrial sounds that they pretty much single handedly influenced...ok Swans helped too.This song this typical of the great moodiness this album dwells on. The vocals sound great and the guitars have a lot of sonic coldness behind them. .

"Mourning Sun" by Fields of the Nephilim - These guys alway hit a perfect blend of dark sonics, menace and mystery and when you listen to this song you can really hear how it influence the most recent Watain.

"Sunbather" by Deafheaven- Well it's getting hard to separate these guy's music from their career choices, as the band is now playing Bonnaroo. A closer listen to this song proves the only thing separating them now from a band like Russian Circles is  their vocals. Kylesa has played both Bonnaroo and Coachella and they are still playing bars so their might be hope.

"I'm Still In Love With You" - Thin Lizzy- As far a ballads go, this one is done pretty right. Not a fan of love songs, as lyrically they tend to run the sames lines. The guitar playing and the drumming on this song kick all kinds of ass.

"The Stars Are All Out Tonight" by David Bowie- This album continues to grow on me with each listen, which is a good thing as it is probably the last we will get from him as he just had another Birth day and I doubt we are going to hear a 70 year old Bowie crank another out.

"Invaders" by Iron Maiden- Growing up I thought of this song as a fast forward classic as compared to the rest of the album it's fairly straight forward, but after covering it I grew a new appreciation for it.

"Forever Animal" by Beast Milk- Before the fervor that built around Climax last year, these guys were already kicking ass, though I caught a more Hawkwind vibe from them than the goth thing back then and his vocals have come a long way.