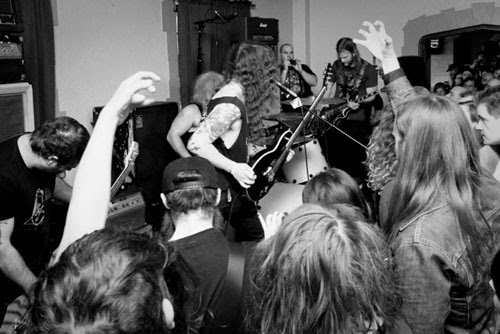 Normally I like to wait until my ears stop ringing before I sit down to review a show, but if I was going to do that then it might be next week before I got around to it. It had to have been one of the loudest shows I have been to since the last time I saw Swans. Which is not what I expected, on album Mutilation Rites tend to layer guitar parts and color their songs with a fair amount of devil in their details. Here they slapped you with a buzzing wall of sound. But we are getting ahead of ourselves as it was not the least of the unexpected events that transpired.

The reception for the band was warmer than expected. If you were going by the forums and social media then you would thing the normal  perception of the band in the south  would be to wrongly lump them in with the rest of the Brooklyn metal scene. While their were a few familiar faces from shows like Deafheaven, it appears the general metal populous is not as  narrow minded or  as out right ignorant as this inner webs lumping of all the Brooklyn bands together crammed against the likes of  Liturgy and Krallice.

With locals the Pinecones, who play a drone heavy punk rock like a fusion of Mudhoney and Swans on a blind date to anarchist rally. So this drew a small percent of the hipster factor. Cesspool, where hard to take seriously as their singer only gurgled and made gestures that suggested he was making fun of death metal bands , which at best would be what the band was trying to emulate.

Then came Full of Hell. The singer stayed in the pit where he thrashed about in equal measure to his screaming and grunting. The band was as abrasive as they needed to be. The drummer exploded at his kit, keeping time with his head more often than not. Leading the pack in the type of hard-core Converge brought to life, these guys are intense and hard in a way hard core should be.

American black metal has crossed over in a big way seeing a band like  Deafheaven is now playing Boonaroo, some of the menace has been taken out. So what is a band to do?  Mutilation Rites, answered this question by cranking up way past what the Drunken Unicorn's P/A could handle manifesting some pretty punishing sonic emissions. Their volume spoke louder than words, their music was as much felt as it was heard. Being a very different experience than what is committed to their albums, it instead captured the drone of white noise shoved into the metallic intensity.

Before they began the assault the singer asked to not have vocals in the front monitors and the growls coating the drive of what they do just as another layer rather than really overtly accenting lyrics. In fact the difference between the recorded work and what was unleashed on the stage, made a distinction but the two art forms, much like a Swans show hits you over the head and entrances you at the same time.

The band focused more on selection from "Empyrean" which lended it's self to the exercise in sonics, better than their earlier more straight ahead metal material ,the thrash under tones and guitar heroics, were toned down for a more punk feel at time. The band came the closest to any I have heard yet match the sonic hypnosis of Transylvanian Hunger era Darkthrone and sold me on the balance between sonic harshness through the distortion of volume and being heavy as in metal. To a certain extent the layers of their more nuanced guitar work were sometimes sacrificed to the altar of volume, but any doubts about how "trve" this band is should be put to rest with the live experience.
Posted by Wilcifer at 11:11 PM