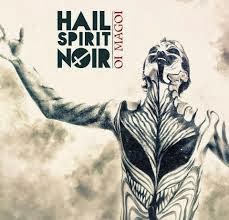 Here we go continuing with all thing blackened for black history month. Its no surprise that the  history of  Hail Spirit Noir's members finds this band getting their start playing in prog bands, only to have butched it up a bit over the years. The Greek band's second album find their guitar tone slacking up a bit and the band further in Sigh's zip code.

The opener finds the band in the dizzying almost Mars Volta blur of prog jamminess, rocking out in more of King Crimson than King Diamond direction. There are those "Whole Lotta Love" breakdown moments where the guitars lay back like Jimmy Page and let the bass and drums keep a more jazz like groove going. The Deep Purple like keyboard tones helps win me over and the exotic scales the solo toys with seals the deal.

"Demon For a Day" finds more of a folk frolic skipping through some of the songs myriad groove, even the odd helter skelter Mr. Bungle like blasts popping in here and their for the brief black metal winks, that are further elaborated on later in the album. The flute solos help fuel the folk metal comparison, but these guys are too chaotic to turns these into the more traditional pagan drinking songs.

At time a thicker gain guitar tone would make this more metal, but they are banging away at their guitars so I can respect the fact they are wanting to go a different route to heavy. In fact at times the harsh vocals are the only element that really keeps this metal. With a title like "Satan is Time" you would expect the growls to get more demonic rather than the clean vocal tone , that is pretty impressively sung with a lot of passion behind it, falling closer to the Moody Blues than what you would expect out of a black anything band. This in some ways reminds me of what the Swedish Shining was going for at one point, but these guys nail it better.

How many black metal-ish bands have a song about a mermaid, at 11 mins it's the longest track on this album, for a prog band these guys normally keep things pretty concise and cram a lot into each song. This songs like if Pink Floyd had been commissioned to make the Exorcist soundtrack. Though it takes on a more nautical sway, with a more Rush like accent to the groove and the vocals going in a more Arcturus direction.

Things go more 70's prog on "Hunters" though an old school Darkthrone type gallop launches this song into battle, with clean vocals providing the kind of dynamics more common on an Enslaved album, which is another reference point in terms of who this bands peers are when it comes to chops. Black metal fans don't fret though things pick up and get blasting midway into this song.

The album closes with the determined but slower chug of the title reminds me of Ghost jamming with Enslaved. Like most of their songs they are not content to just hang on this riff for long. It does seem to hold the most traditional song structure of the album, which is an odd choice as I would think they would want to pull out all the stops. They do drop down into the more Led Zeppelin like break down.

Overall I am really surprised by this album, it's one of the best metal release so far and really succeeds in that fact the metal elements come together rather organically. I will give this one a ten as it's pretty flawless and engaging, lets see how it grows on me , if you can't take prog leaning them it's just not for you.