Interview the Bands of Hammerheads 3 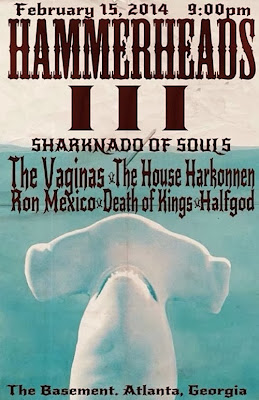 Saturday the 15th punks and metal heads will be drinking away post- valentine blues at the Basement in Atlanta for the 3rd Annual Super Bowl of Hammerheads, which is being billed as the Sharknado of Souls, ... I'll take Megadeth for 500. The Punk and metal scenes in Atlanta have an incestuously divergent history so I spoke with three of the bands on the bill about the show which seems to be a celebration of that fact.

Adam Edgewood of the Vaginas

So this show is a coming together of punk & metal bands, you guys obviously fall on the punk side of the fence. What influence has metal had on you?

We have always listened to metal, we grew up listening to it. We started out as a joke , we formed to play an open mic in Alpharetta and it kept going. We think of yourselves as a punk metal band.

How do you compare the entanglement of punk and metal scene in Atlanta vs other cities you have played?

There isn't a punk scene in Atlanta anymore. Metal is where it's at in Atlanta now.

What are you looking forward to the most about this show ?

Whenever do this show it's a party. Glad to bring our friends from Harkonnen out from Texas. Its always a killer show, with beer being sprayed every where.

What else do you guys have planned for 2014?

We are setting up another festival for may/june and we are playing with the Goddamn Gallows at Smith's Olde Bar.

Alex from the House Harkonnen

So this show is a coming together of punk & metal bands,what side of the fence do you see ourselves falling on.

Alex- We are more metal. Grew up as metal kids, but still kinda both. We are almost more of a hard rock band. We have been playing with the Vagina's forever. We  are maybe a little heavier, though they are equally heavy just in a different way. In some ways similar so it always has been a good fit playing with those guys.

What album got you into punk-

Whats the scene like in Arlington these days as far as punk and metal goes?

Alex - Its mainly metal in Fort Worth, there is still some fall out in the after math of Pantera ,with a lot of bands got new metal and stupid. There some bands playing sludge and southern rock , but it's a lot like it was back in the early 90's.

What are you looking forward to the most about the show Saturday?

Alex- Its a good party the is the third one we have played. Its always at pretty interesting venues.
We love playing with the Vaginas. There's always an after party and we will probably end up crashing at Adams. We have never played with Death of Kings before so are looking forward to playing with them.

What else do you guys have planned for 2014?

We have a new album , so we are selling that, then work on the next album.

Amos and Matt From Death of Kings

This show is a coming together of punk & metal bands, and you guys are a metal band now but come from a punk past, so what album was an influence that brought you over to the darkside ?

Amos- It goes all the way back to  listening to Iron Maiden and Megadeth. It's like you mean it's faster and more technical than punk well sign me up.

Matt- Scream Bloody Gore, it was an easy transition.

How do you compare the entanglement of punk and metal scene in Atlanta vs other cities you have played?

Punk there is a little more interaction at the shows, with people getting up on stage and getting knocked out, that doesn't really happen at metal shows.

Matt- there are a lot of punk kids that you see going to metal shows, then at house parties afterward you never know what is going to end up on the record player so theres alot of kids getting exposed to metal or punk that way.

Amos- I'll second that, there's a gray area where you see a lot of the same people at both shows.

What are you guys looking forward to the most about the show Saturday?

Matt- With  all this bad weather, we have had to cancel shows, so I have been getting a little stir crazy so it will be good to get out and have a release for that restless energy. It's good to see friends and it will be positive energy. Excited to play with Harkkonen.

Matt- Yeah we go back with the Vaginas, those guys always put on a great show you never know what is going to happen. I did sound for them once at Jack's Pizza and I turned up the p/a as loud as I could and it still wasn't loud enough, they just kept playing.

So you guys just released Knifehammer, what else do you guys have planned for 2014?

Matt- We are doing a 6 day tour hitting places like Asheville and Savannah, it will be the first time that we have played these places with the current line-up that's on Knifehammer, so looking forward to that, getting to check out local records stores.