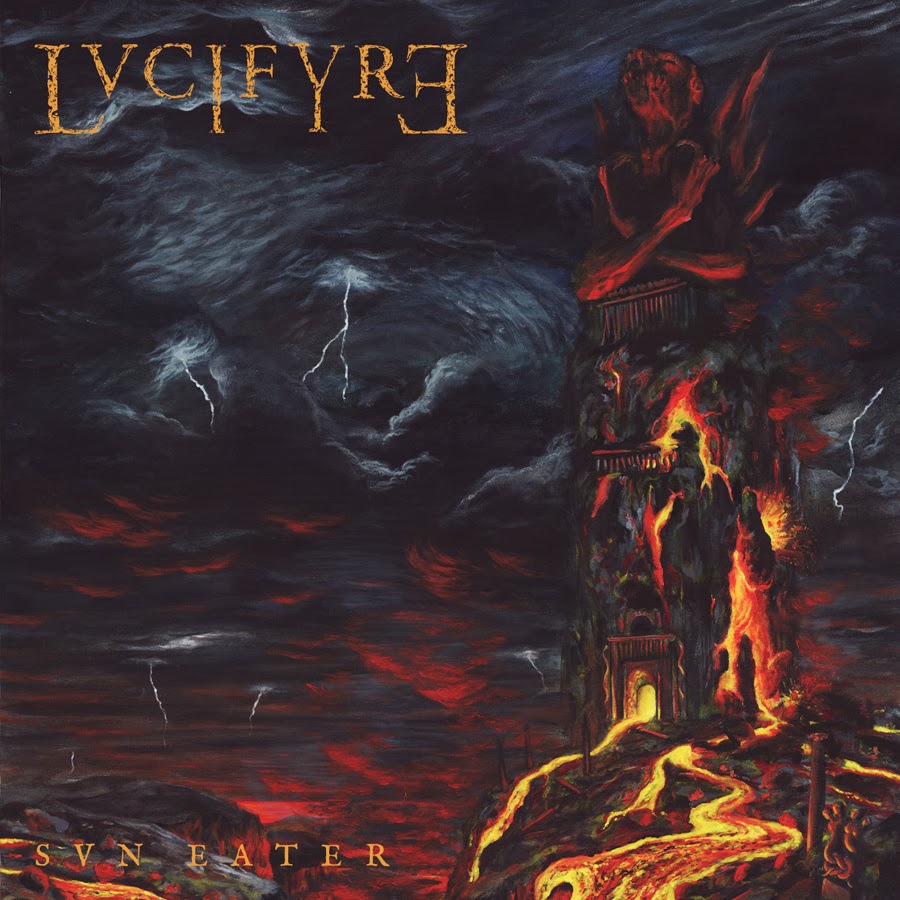 Since it's Black history month herein the States, I'm going to try to cram in as many black metal reviews as I can for the second half of the month. Some of this will of course be more black than others, as there is blackened every sub-genre now. The line between black metal and occult death metal seems particularly fine and this is the ground the new Lvcifyre seems to tread.

This is the London based band's second full length, it's hard to tell how much of what they do as far a presentation is tongue in cheek like Venom and how seriously they take what they do. They feature the former Corpus Christi Drummer.

The album opens at more doom like pace and escalates into a more death metal direction midway though, Von comes to mind as a possible inspiration, though it's a much more well produced effort. The final minutes of the song find the band descending into the blast beats. The album relents little from there.

If you are really sensitive to the sub-genre police , then this album feels much more like a death metal album than it does black metal. Aggression seems to be the primary focus rather than creating any type of atmosphere or hypnotic melancholy. Every thing sounds like bulldozer belched up from hell, as the album chugs at high velocity. They do strike a good galloping groove here and there on songs' like "Liber Lilith".

These guys are animals in the way the attack the songs and their instruments. The guitar is dense as shit and the riffs club you with blunt force. On the title track they hit the more obtuse elements that I don't like in death metal, like the very straight forward snare hits.The growls are about as low of a gurgle as the ear will accept as a human voice. The blast sections might fools some people into thinking these guys are black metal.

By the time I get to "Fornication Waters" I am beginning to get the feeling this is too one dimensional so I am paying less attention to the ear beating and more to any hint of melody or ambiance. Sure it's heavy as hell, but that only goes so far for so long.They are pretty mired into what they do with the only other colors coming in on the interludes surrounding the guitar solos, which isn't enough of a pay off. Sure "Fyre Made Flesh" has a cool riff or two, but the rule around here is cool riffs along don't make a good song. "Nekvomanteion" changes the pace slightly and has the kind of ripping punches characteristic of "Formulas Fatal to the Flesh", but even post- Vincent Angel Worship, only works to a point.

The album closes with the Morbid Angel tinged "Sinister Calling". While it's more grinding and brutal than anything the Tampa band touch, the more explosive guitar playing reminds me of Morbid Angel more than say Incantation, who might be considered the other band these guys draw inspiration from.This album should be brutal and punishing enough to suit even the most jaded metal heads, but if you require more than just heavy this might not be the album for you. I will go ahead and round this album up to a 6.5 , as it's impressive for the sheer punch it packs .