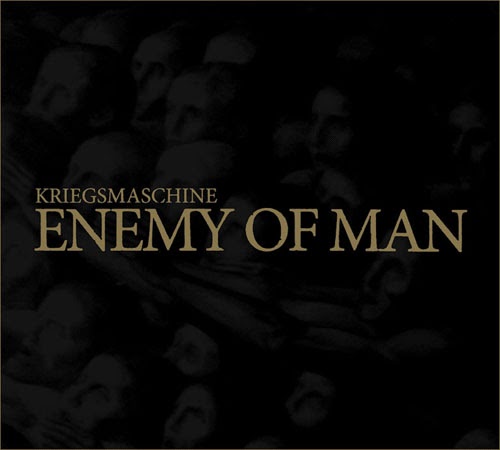 Not relenting in our need to bring the blackness for national black history month, we find this Polish band with a German name features two members of  Mgla among it's ranks. Their guitarist and drummer. More ambient than Mgla, comparison to Ulcerate are not unfounded, though the bands forgos needless wandering into the more technical side and captures the ringing chords so in some ways it's not unlike Blut Aus Nord either, they find themselves in the same purgatory between occult death metal and black metal.

I like how dark this is and the sonic space this album typically inhibits. The album does tend to allow the songs to drone together in one bass laden throb. The vocals stay in a mid- range growl, that are often more of a bellow,   the vocals on this album  are better than say Ulcerate's vocals, but they are by and large an after thought when it came to the fine point of the song writing.

Not relenting in our need to bring the blackness for national black history month, we find it coming from PolandThe album stomps to life with "None Shall See Redemption". It backs the needed punch in the dark to get your attention. The vocals circle a deeper drain as they gurgle in a some what lower register than they typically are through out the album's course. The drummer is pretty creative with some of his more technical experimentation with double bass, the drum mix is much better than your typical Ulcerate album where their treble mixed nature makes them sound sterile like a drum machine.

The only complaint it that all of the songs begin to take on a similar throb. On "Lies of the Father" this is done with enough lurching sway to make it stand out , but the general vein of drone in their lurching swing begins to numb you out once the album reaches "Farewell to Grace".

The formula seems to be give you some breathing room as the lights go low and pound the point home in the most spectrally ominous manner they can summon. The level and approach of ambiance is where they change things up, along with smart drumming which at times is the only thing to differentiate the riffing. Some songs carry more drive and gallop, but retain a similar feel.

The drumming is really one of the album's strongest suits, along with the bands ability to blend atmosphere with this darkened swamp of riffs. The lower throat singing type vocals that chime in midway through
"Asceticism and Passion" bring a new coating of creepy to things and provide some variance in the vocals they were beginning to really need mid way into the album .

The band comes at you with the same storm cloud in the albums final act. If you are not listening careful it begins to sound as if the previous song is still going. So dynamical things start to get a little opaque by " To Ashen Havens".  They blasties creep in a bit, but the song retains such a similar feel this is not fully realized.The progression are not so accented that stand out , but a blur of shuddering guitar.

The title track closes out the album at a similar pace as what the band had been riffing off of for the bulk of this lp. The syncopation shifts a tad here, but the drone retains the stain. They linger on the chords in a very sludge drenched doom manner now, before launching off into a elephantine shuffle.It hits in a similar monolithic manner as Meshuggah to me, technical but in an understated only the drummer gets the joke way.They simmer down and drone out the same way they came into this world. I'll give this a 7.5 , round it up if you are a huge Mgla fan.
4.5