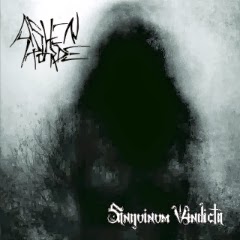 Marching to cram 28 black metal reviews into the 28 days of black history month , we take a look at Ashen Horde's debut album. This one man band is pretty impressive for he attacks the songs with the kind of epic fury the guys in Immortal do. Rather than the arctic wasteland of the blizzard beast, he cranks this out in sunny Hollywood.

Off the bat this is more black metal than Lvcifyre, whose album I just reviewed. There is a thrash like under current that is also present in Immortals work as well, so since this is set up at the altar to the Sons of Northern Darkness, this comes as no surprise. There is more death metal or Behemoth like crunch at times on "Mind Over Slaughter".

The fast paced guitars come at you with a quick charge, however the songs are pretty well composed giving you time to catch your breath for a more dynamic ebb and flow than you might think you are going to get. The playing is also pretty technical at times, so if you are looking for cvlt hypnosis, this is not the album for you.It's remarkable that he is as skilled of a drummer as he is a guitarist.This guy also adhere to the cool riffs alone don't make good songs, but the almost 80's feel to the intro of "Baited Breath" shows he can write as killer of a riff as anyone. The more pummeling moments of the album like "Smoke and Shadows" suggests Emperor might be an influence as well, as their is the sort of organized chaos in the way the maelstrom of riffage is assembled then spit back out at you.

The thrash thing rears its head high on "The Burden of Sorrow" with blasts interspersed to keep things black. One thing about this album is it deviates from black metal in the sense there is little ugliness or dissonance,which I find a defining characteristic of the genre and what separates it from death metal. So this is very death metal friendly and furthers the trend of blurring lines in this regard. The crunch to some of the riffs in "Midwinter's Loss" in awesome despite not being very black metal.

The vocals are really the albums only weak point, they get the job done and vary in degrees of rasp, sometimes recalling the more Immortal croak, though not like Inquisition does in this regard and gives the project more of it's own sense of identity because of this. The rasp often finds it's self in more Skeleton Witch range.The lyrics are not too obscured in the rasp, though they seem to fall into pretty typical metal stereotypes, rivers of carnage and varied forms of hellish ultra-violence are explored. Despite these factors this is still a very solid debut and I don't mind rounding it up to a 9, worth checking out if you are a thrash fan who has been on the fence about black metal.