Night Fell: "The Living Ever Mourn" 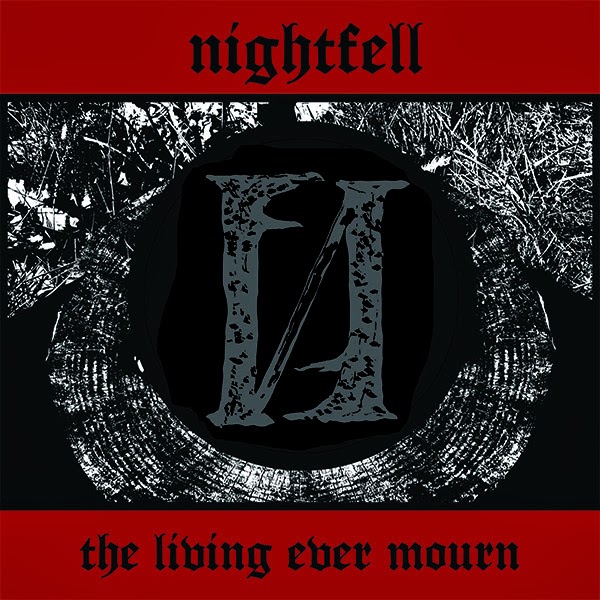 Moving on with our black metal for black history month trend, we are coming upon another genre crossing band in Night Fell. This Portland brings other elements to the table , but they are generally dark enough to sit under the black metal banner. In some ways it makes them more like classic black in the sense of early Mayhem and Celtic Frost. Their riff find doom laden groove, which make for a fun listen.

The guitars when played faster certainly capture the black metal sound tonally. I can hear bands like Craft in their dirty sound. The wretched vocals lean closer to the more deathly elements of doom. I don't really hear the sludge they get tagged with, it sounds like gritty , but straight up metal for the most part, the guitar riff to "I Am Decay" has a good hook to it . The drumming leans more towards death metal as well. It keeps thing moving even when it slows into a more doom like crawl.

The albums creeps into darker corners on " Empty Prayers" that holds a more funeral doom melody in the guitars and a clean vocal chant. This swings like a drunken pirates hymn. The Tempo taking a shift on " the Hollowing" the opening riffs is tensely pick as the toms build around it in a almost tribal manner before it breaks into more of a gallop.It tramples into some pretty epic storm the gates riffing, touching on the more trash flavored black metal. There is a weird break down in the finals minutes where drums pick up the kind of tension the guitar had established at the beginning of the song and the vocals take on a lower more spoken quality.

"Altars to Wrath" leans back into the more doom like lurch before taking off into a deathly chugged black swirl. The very melodic bridge section, is some what Dissection to me.   The album closes out with the song "Funeral Dirge" that opens with creepy guitar in more of a ...funeral doom place tonally, which lives up to the titles name and should come as no surprise, though when the song actually kicks in it goes with a more epic yet melancholy gallop.

Overall this album surprised me in the both quality and songwriting, it held much more blackness to it than what I had heard about these guys and surprises me that this came out of America, so I will round it up to a 9.