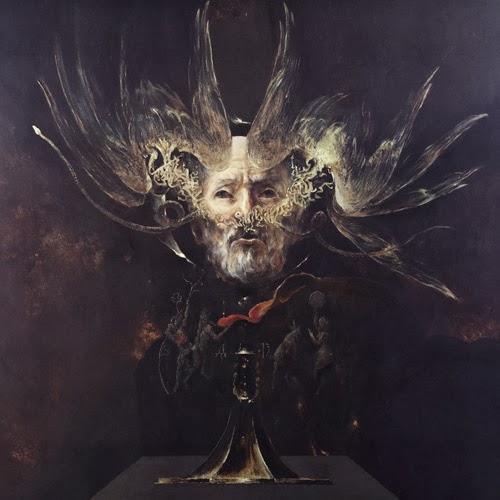 I like Behemoth for what they are , it's entertaining, they have written some catchy songs with crushing riffs that have been worth a head band or two. To be honest I had to listen to the opener of their new one three times, to be able to pay enough attention, in order to discern if I liked it or not. When it comes to my cool riffs don't make for a good song, these guys sometimes find themselves on the rougher end of the deal. There are some elements that remind me of "Iowa" era Slipknot.

They try really hard and that is worth something. They are trying really hard to be black metal and some times this album makes me think I might have liked it more when they wanted to be more industrial or more like Dimmu and epic everything out. Their blast beats too often sound like a kid running faster down a hill than his legs want to agree with. There is a pretty mean almost At the Gates kind of gallops that hits in "Furor Divinus"

Lets talk about the lyrics. I was under the impression Nergal was a thelemite, so the very heavy handed upside down cross , in your face approach to the lyrics seems a little juvenile. Their earlier more ambiguous lyrics, held more occult to them, since by definition occult means hidden. They almost remind me of Deicide lyrics at times, and the Glen Bentonesque moments don't end there, they crop up in  moments in the rush brutality of the vocal phrasing in "Messe Noire".

The balance of dynamics in not as finely tuned as it was on "Evangelion", to some this might come as a good news as it's a heavier album and much more death metal. The hyper blast of "Amen" strikes me as an attempt to use the rapid fire pace to rush an otherwise mediocre riff past you, in order to get to the solos, which are the album most shining moments.

While this album is by and large a disappointment, it does have some moments of redemption on the creepy title track. Nergal comes close to singing here, and the song has groove, both elements contribute to better songwriting. The bass playing is pretty stellar on this song, so it makes the fact that these are talented guys capable of doing more frustrating as a listener. Their is a similar touch of melodious fury on "O Father O Satan O Sun" it hits a very Led Zeppelin like groove. I'll give it a 7.5, but wanted something different than trying to rush the songs past me, it does have some worthwhile moments and if you are a fan of the band round it up to an 8,