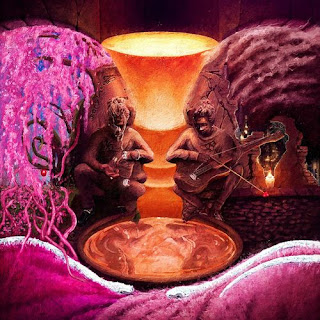 I loved his album "Beautiful Thugger Girls" but have been disappointed by the less than impressive work he released since. This album could be a step in the more out of the box song writing that marked "Thugger Girls". Hip hop seems to conform to factory setting more often than not these days. When things like guitars are introduced then he is a step ahead of the game, but at the top of his when he combines this with strong grooves and his quirkier lyrically delivery.  He often falls somewhere between singing and rapping. Granted he is a better rapper than a singer. When he tries to sing without the aid of auto-tune he is pitchy to say the least. The stripped-down intro, is not really much of a song so we will write it off as just an intro. "Stressed" is a little better but stays too close to what the rest of mainstream hip is doing. 'Stupid / Asking" is stupid lyrically with an almost childish slant, but it does so in a way that at least allows his personality to shine through. "Recognize Real" doesn't allow me to recognize it as a song that stands on its own as it is forgotten as soon as it's heard.

"Contagious"  is more minimal in its instrumentation but plays by its own rules as he gets into his feelings. I think he hits the balance of all the elements he is playing with best on "Peepin in Window" .  Future's appearance on this song helps him as well. There distorted beat on " Rich Nigga Shit" sounds like a robot fart. I am not sure it was the best thing to anchor the song on, but it is a step closer in the direction of " Thugger Girls" so I am on board for it.  Juice WRLD , appear on the song as well, but he sounds just like everyone else. Post Malone saves the day on " Livin it Up" which is the strongest hook so far, as he fares better than the other guests so far. ASAP Rocky is also on this track.  His contribution just blends into everything else. By the time I get to "Yea Yea Yeah"   I am beginning to get the feeling that he would replicate "Thugger Girls' but does not want to commit to it.

"Yea, Yea, Yea" shows that all the smoke and mirrors that keeps hip hop propped up is the sword it is going to die by since it is the sword it trying to live by. This song is not awful, but it is a clear snapshot of the writing on the wall. "Insure My Wrist" is weaker than "Scoliosis" with "Bubbly" stronger than both, even with Drake who I hate on the track, so the good news is the album gets better as it progresses. There is a poppier r&b feel to "Faces", it has a marginally better chorus, but as a whole is unfocused. While his off-kilter phrasing is his strength as a rapper, this minimal track behind him does not work as well to keep the songs strong.  The production is more experimental which is some ways takes cues from Travis Scott. This helps things to improve on "Fifth Day Dead". Overall though his lyrical themes are not a fresh as they once were.

The question becomes can Doja Cat save "Icy Hot". The track they are rapping over is better than the bulk of the album, so she had a great deal to work with.  Nate Ruess from FUN drops a vocal on the ballad "Love You More". Which seems like it would be a surefire bet for radio if it was censored.  So as long as he has sufficient help, he seems to be ok, but left along Young Thug is kinda weak on this one. Maybe "Hate the Game" will prove this theory wrong has it does have a more unique quirk to it.  The last song lacks hook and Mac Miller proves himself pretty worthless. I will give this album an 8.5, as it is fun at times it just falls short of what I know he is capable of but that is better than most idiots making hip hop these days.