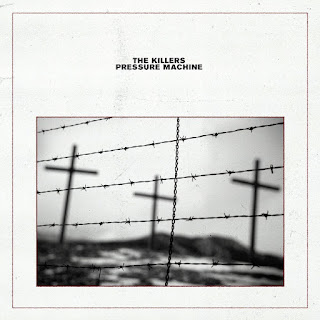 This album had been sitting in my computer, just now getting around to listening. I had been iffy on these guys as when they hit big on the radio they were not my thing, though now when they come on I am ok with them or even like some songs as the melodies are catchy, then I heard how the singer is a devote Morrissey fan and that made me more curious so this is the first album I have given a listen, I really liked the opening track and the story it told about small town drugs was cool. The second track is more Bruce Springsteen than I expected, more folk, than post-punk influenced pop. I guess this is an interesting time in their career to check them out as they peaked popularity wise so that gives them more room to play around with what they do. It seems here on their 7th album they have decided to do just that write a folk-rock album about Flower's childhood in the heartland.

Harmonica driven ballads is not what they are known for so imagine my surprise finding this out. I like Ryan Adams and country music so not opposed to this, and I do have a thing for artists and their weird phases like disco Kiss and new wave Alice Cooper, so add country Killers to the list. "Cody" is more driven by the drums, allowing them to amble on not quiet into a groove, but something that is more moving. "Sleepwalker" seems a little more like what they do just run through the more Neil Young or Ryan Adams like filter. It does work off more of a groove and catchier melody more in line with what i have like from them previously. Phoebe Bridgers joins them for "Runaway Horses" which proves to be an effective use of her in this duet. The first electronic elements that do actually sound like them emerge on "In the Car Outside", so they have not forsaken it altogether and marry them to the more folky thing they are doing pretty well.

"In Other Life" works pretty well it sort of splits the difference between the sonic theme of this concept album and what they normally do.  "Desperate Things" is a Bruce Springsteen like ballad that is so fragile the melodies are more musing as if they are afraid to take form. The title track is more substantial. Flowers uses his falsetto to good effect here. The last song kind of meanders but sounds good for what it is. The bulk of this album might not have been what I was expecting but I like the melancholy thoughtfulness to it I will give it a 9.

Email ThisBlogThis!Share to TwitterShare to FacebookShare to Pinterest
Labels: americana, folk, the Killers