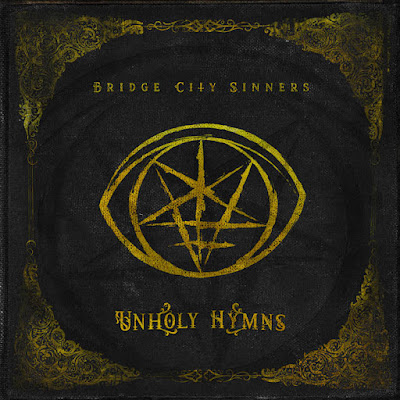 There is a great deal of maturation in the evolution of this band on many levels. Production wise to songwriting. This doesn't sound like a bunch of train hopping punks with banjos. What has been sacrificed in terms of the raw grit they once had has been replaced by a lusher sound and wider range of influences. Namely this vaudevillian jazz that gives these songs more of a swing. To the point that this has more in common with Amy Winehouse, than Amigo the Devil. The satanic ragtime feel sometimes gives a New Orleans vibe. They have more layers of instrumentation to pain these songs with so there is a much ambitious scope. According to the band the second half of this album is also a concept album. They seemed to be more committed to darkness this time around. Both "Rock Bottom" and "Departed" sort through questions of mortality and what drinking is doing to make her days more numbered.

"Pick Your Poison' has more of a swing feel, vocally she touches back on that sultry Amy Winehouse styled jazz belting but gives it more of a jitterbug. "Devil Like You' comes closer to their old sound but also has the dramatic feel of say Rasputina. "Love of Mine" is more sweeping with the violins. She laments about the flaws of relationships here. The last verse has more of a jammy feel. The concept album being to unfold on the 7th track " the Legend of Olag hai" which is indeed darker. You can almost hear a metal influence. The harsher screamed vocals that come in confirm this. This song is broken into two parts, the second more melodic and not as foreboding, even when the gang vocals come in.

The vocals give 'the Fear" a more crust punk edge. The music races more along the lines of blue grass. This kind of attack continues on "the Damned". The title track that closes the album is more melodic and doesn't not carry the aggressive screaming of the previous songs. It is almost more like a ballad until the tension begins to build midway into the song. It sounds like something that would play at Disney's Haunted Mansion. Overall this album is a powerful step forward I will give it a 9.5.