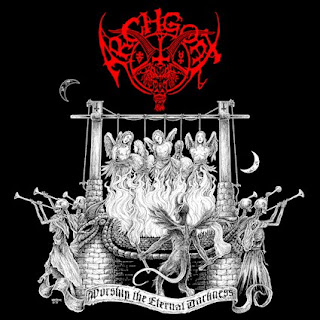 These guys from Finland are one of the few bands who bring the legit Evil on a regular basis, sometimes it has a track record on hitting you with all the brutality and not placing the most emphasis on songs. This time that is not the case. These are strong songs that stand on their own. There is a measure of restraint used as they slow into a more mid-paced throb for "All Christianity Ends". The tempo shifts into more of a gallop as the song progresses. The vocals which are at a low death metal gurgle, consistent with the bands normal vocal style is once again dominate. It provides a narrative more like Inquisition where it is present and follows the guitar, without adding a great deal of color to really be the focal point of the song.

These guys have improved is the production value is solid.  They dial it back for a more retro death metal sound on "In Extremis Nazerene " Perhaps not as inspired as the first three songs. This old school feel continues but with more of a raw thrashing on "Rats Pray God". When it comes to blackened death metal "Empyrean Armageddon" might be the best example of how those two sounds should be balanced. It certainly works better than when they get more caught up on the blasting with "Blessed in the Light of Lucifer: which does slow midway in to give some groove. The storm of intensity unleashed on the title track hits like a sonic blur before following a similar formula as the previous song when it slows into a more deliberate march,

"Burial of Creation" which closes the album has more ambiance to it this dramatically builds to create a darker tone. They slowly grind into the song. The raspy gurgle bubbles under the guitar. This does give the album a much-needed dynamic shift rather than hitting you with another bunch of blasting.  Overall this album is a step forward as songwriters so I will give it an 8.5, no one is going to call these guys poseurs anytime soon as they are fully committed to brining the evil