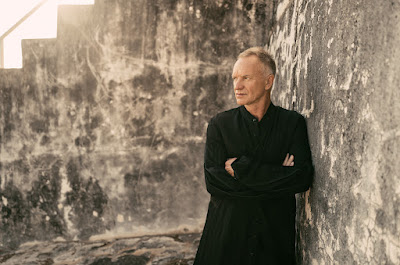 If you knew what a hug fan of the Police I am this would make more sense. The first two solo albums are really the only ones I have spent the most time with. This is much more streamlined and poppy than those two albums. He is not using jazz session guys here. Are there corny lyrics here and there? Yes. In fact, it almost reminds me more of Paul Simon's flirtation with pop in the 80s. But this is Sting so he is capable of writing pop when he feels like it. I am fine with him doing pop, though he needs to dial the peppiness down as "If It's Love" is too happy for my tastes, but well done for what it is.
The Sting I want to hear is on the more organic "the Book of Numbers". All the songs are going to be good this is Sting we are talking about who is a total pro and not some punk band from Philly just banging it out. There is a less organic groove to "Loving You" that drone on the same beat.  His vocals are capable of carrying the song. The first song that feels like the Police is "Harmony Road", his melody glides down the scale with fluid ease. "For Her Love" is moody balls that feels like it could have come from "Dream of the Blue Turtles ", It also needs to be mentioned that for 70 his voice sounds awesome.  "Hills on the Border" has a rambling folk country feel to it.  Jazz and Celtic influences both collide on "Captain Bateman" which has the first rock-tinged drumming.  "The Bells of St Thomas" leans more on the jazz side of the equation, making it not as overtly hooky.
The first song I can hear any of the strain brought on by age is the title track, though this ballad is performed with a raw honest feeling and voice goes higher than what you would expect from any 70-year-old. Granted he is physically in great shape. "Captain Bateman's Basement" is not what I would have expected a jazzy instrumental. I have heard Sting do some great covers, his version of "Little Wing" being one of them. This version of "Sitting on the Dock of the Bay" seems unneeded.  I will give this album a 9, he sounds great at 70.
Posted by Wilcifer at 1:35 PM

Email ThisBlogThis!Share to TwitterShare to FacebookShare to Pinterest
Labels: 9, pop, Sting, the police